The AAV7A1 Assault Amphibious Vehicle (AAV) is used as the US Marine Corps’ primary amphibious platform to move marines and cargo from ship to shore. The AAV uses a boat-like hull design and powerful water jets to make it one of the world’s best amphibious assault vehicles.

The AAV7A1, with a cruising speed of 13kmph and an endurance of over seven hours in water, can conduct amphibious missions up to Sea State 3. It can be launched and recovered from Landing Ship, Dock (LSD) and landing platform/dock (LPD and is armed with a.50 cal machine gun and MK19 40mm grenade machine gun.

The all-welded aluminium hull protects its three-man crew and 21 combat troops from small arms fire, while the 400hp turbocharged diesel V-8 engine provides the AAV7A1 with a maximum speed of 72kmph on land.

The BMP-3F incorporates amphibious systems such as a lighter anti-surge vane and an air intake tube, and can operate at Sea State 3. It can stay afloat for seven hours and is powered by two water jet propellers and a four-stroke, liquid-cooled diesel engine, which ensure a maximum speed of 10kmph afloat.

Fire support is provided by a 100mm 2A70 gun, a 30mm 2A72 automatic gun and 7.62mm machine guns. The vehicle can fire all onboard weapons at Sea State 2 and is protected against small arms fire and shell splinters.

The ZBD-97/Type 97 infantry fighting vehicle in service with the Amphibious Mechanised Infantry Divisions of the of the People’s Liberation Army is fully amphibious and is propelled in water by two large water jet ports at the rear hull.

The hydraulically actuated wave fence at forward hull ensures the front section to stay afloat during swimming. The two-man turret positioned in the middle of the chassis is mounted with a 100mm rifled gun / missile launcher and 30mm coaxial cannon, while the secondary armament includes a 7.62mm machine gun. The vehicle has maximum speed of 20km/h on water and 65kmph on road. 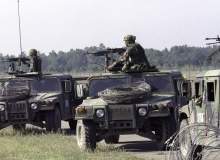 End of an icon: the rise and fall of the Humvee

A two-man turret is armed with a 30mm cannon, a coaxial 7.62mm machine gun and two HJ-73C anti-tank guided missile launchers. The vehicle offers protection against small arms fire, 12.7mm ammunition and shell splinters, and carries three crew and up to 10 marines. Its power-pack includes a high power engine providing a speed of 65kmph on road.

The SUPERAV features modular design allowing for modifications as required by customers, and was specifically designed to perform amphibious missions in harsh environments. It is fitted with snorkel and bilge pumps and can perform maritime missions at Sea State 3.

The vehicles can mount weapons up to 30mm calibre, and feature high hardness monocoque steel hull and ballistic armour offering base level protection against direct fire weapons and anti-tank mines. The IVECO Cursor 13 6L turbocharged diesel engine enables the SUPERAV to run at speeds up to 105kmph on paved roads.

The BTR-4 from Kharkiv Morozov Machine Building Design Bureau (KMDB) is an 8×8 amphibious armoured vehicle developed for the Ukrainian Army. The vehicle propelled by two water-jets, swims at a maximum speed of 10kmph and can be powered by either 3TD two-stroke or Deutz four-stroke diesel engine.

Havoc 8×8 multi-role amphibious ground combat vehicle from Lockheed Martin swims at a maximum speed of 12.8kmph and can effectively ford water depth of 2m, and can operate at Sea State 2. The vehicle can attain a maximum speed of 104kmph and range of 900km on the road.

The Havoc, developed based on the Patria 8×8 AMV design, features a spacious interior layout accommodating up to 12 marines and integrates numerous weapons, sensors and communication system to meet the demanding requirements of amphibious troops.

The Terrex 8×8 amphibious wheeled armoured vehicle from Singapore Technologies Kinetics (ST Kinetics) swims at a maximum speed of 10kmph and fords to a depth of 1.8m.

The amphibious armoured vehicle can be configured to mount a remotely control weapon station (RCWS) armed with a 12.7mm heavy machine gun, a coaxial 40mm cannon/7.62mm machine gun or a 30mm cannon.

The Terrex offers superior mine blast protection and can be equipped with active/passive armour for all-round protection against improvised explosive device (IED) explosions. A Caterpillar C9 turbocharged diesel engine provides the vehicle with a maximum road speed of 105kmph.

The BTR-82AM, a new amphibious infantry variant based on the BTR-82A wheeled armoured vehicle was successfully tested at the Black Sea Fleet’s naval base in Sevastopol in April 2013 and are currently being delivered to Russian military base in Abkhazia.

Rear mounted water-jet ensures the BTR-82AM move at a maximum speed of 10kmph on water. The vehicle features a new integrated fighting module mounted with a 2A72 30mm cannon and a 7.62mm machine gun.

The BTR-82AM is powered by KAMAZ diesel engine with a rated power output of 300hp, and is also fitted with new transmission parts and suspension for high mobility in rough terrain.

The BMD-4M airborne amphibious infantry fighting vehicle in service with the Russian Airborne Troops is mounted with two water-jets on either side of the rear hull enabling a maximum speed of 10kmph on water.

The vehicle integrates a trim vane, an automatic bilge pump and a snorkel supporting amphibious capability, and protects its crew from small arms fire and artillery shell splinters. Fire power is complemented by a 2A70 100mm gun, a 30mm 2A72 cannon and a 7.62mm coaxial machine gun.

A UTD-29 multi-fuel diesel engine provides the BMD-4M a top speed of about 70kmph on road. The vehicle can be para-dropped from aircraft.