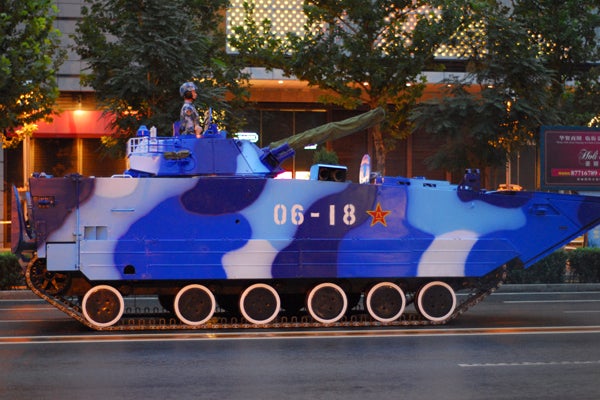 The ZBD-05 IFV complements the ZTD-05, a light tank variant based on the ZBD2000, in amphibious operations. The IFV’s design concept is similar to that of the Expeditionary Fighting Vehicle (EFV) designed for the US Marine Corps.

The ZBD-05 incorporates a plane hull with engine section in front, welded turret in the centre of the hull and passenger compartment in the rear. The IFV is operated by a crew of three and accommodates up to ten fully equipped marines.

The driver sits at forward and the commander and gunner are positioned inside the 30mm cannon turret. Troops enter and exit the vehicle through the rear door or roof hatches.

The Russian Plavayushchiy Tank or PT-76 is a light, amphibious tank developed in the early 1950s.

The two-man turret integrates components of the Ukrainian Shkval turret and is mounted with a 30mm automatic cannon, a coaxial 7.62mm machine gun, AGS-17 automatic grenade launcher, and two Hong Jian-73C anti-tank guided missile (ATGM) launchers one on either side of the turret. Eight 76mm smoke grenade dischargers are also fitted on either side of the turret. The vehicle also carries missiles inside the hull for reloading and can fire all its weapons afloat.

The KBA-2 30mm automatic gun (ZTM-1) aboard can fire 330 rounds a minute for a maximum range of 4,000m supported by optic-television system with the viewing field stabilisation in vertical and horizontal planes, anti-aircraft periscope day sight, and day periscope surveillance devices.

The ZBD-05 is powered by a high performance diesel engine and can operate at higher speeds in water. The power-pack is mounted at the forward of the vehicle and gives the IFV a maximum speed of 65kmph on road.

"The ZBD-05 is powered by a high performance diesel engine and can operate at higher speeds in water."

The fully amphibious vehicle is propelled in water by two large water jets mounted to the rear side of the hull. It also features a hydraulically operated bow with transom flaps ensuring hull skimming on the water. The large bow wave plate is hinged and hydraulically extended when the vehicle enters the water. The plate covers the bow and glacis plate to form another layer of frontal protection when stowed.

The ZTD-05 infantry fighting vehicle features six double road wheels and three return rollers. The upper part of the suspension can be covered by armour plates. The vehicle has a maximum range of 500km and can negotiate a gradient of 60% and side slope of 30%. It can cross a vertical step of 0.7m and trench of 2m.

The vehicle can be launched at sea from amphibious assault ships and sails at high speed over a long distance to shore, while the maximum speed on water is about 45km/h.