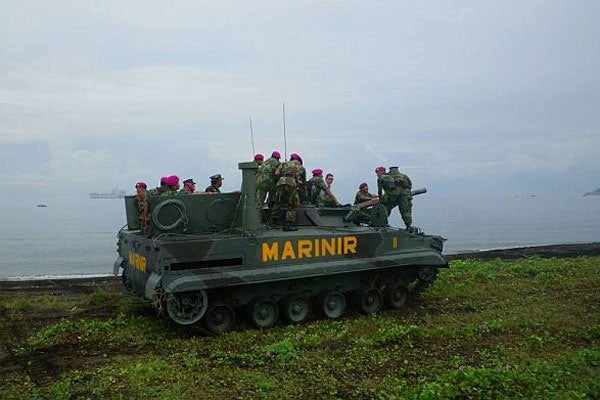 BMP-3F is a marines fighting vehicle designed and manufactured by Russian company Kurganmashzavod, for more sustained amphibious assault operations. The vehicle features a flexible design to operate under difficult sea conditions, and offers increased fire power, manoeuvrability and protection of the marines over its base model, the BMP-3 infantry fighting vehicle, which was first produced in the late 1980s.

Other variants in the BMP-3 family of vehicles include BMP-3K command post vehicle and the BRM-3K combat reconnaissance vehicle.

The marines vehicle features higher floatability reserve factor and stability and can be afloat at sea state three and do firing with necessary accuracy at sea state two.

The vehicle is operated by a crew of three and accommodates seven soldiers. It has a length of 7.14m, width of 3.5m and height of 2.5m, while the weight is 18,700kg. The vehicle is equipped with a light weight anti-surge vane and an air intake tube.

The BMD-4M is a new generation amphibious infantry fighting vehicle (IFV) manufactured by Kurganmashzavod JSC, for the Russian Army.

The BMP-3F marines fighting vehicle is equipped with a 100mm semi-automatic 2A70 gun / missile launcher serving as the primary armament. The launcher, stabilised in two axes, can fire 3UOF HE-FRAG rounds or 3UBK10 anti-tank guided missiles.

The vehicle is also armed with a 30mm 2A72 automatic gun, which is also stabilised in two axes. The automatic gun fires 3UOR-6 and 3UOR-8 rounds. A 7.62mm PKTM coaxial machine gun, two 7.62mm bow machine guns and an 81mm smoke grenade launcher are also fitted.

All the weapons are mounted on a single turret, which is protected by anti-surge vanes. The hull and turret of the vehicle are built with aluminium alloy armour to offer increased protection for the personnel against small arms fire and shell splinters.

BMP-3F’s fire control system enables effective engagement of a variety of targets during day and night at halt as well as on the move.

The gunner has a SOZH main sight equipped with an integrated laser range finder providing day, passive-active night sight with independent bi-axial field-of view stabilisation. The gunner’s sight has a control range of up to 5,500m and identifies targets at a range of 7,000m during day and at 800m during night.

The BMP-3F marines fighting vehicle is powered by an UTD-29M diesel engine, which produces a power of 500hp. It also consists of a hydro mechanical transmission system with four forward gears and one reverse gear. The propulsion system provides advanced mobility afloat and allows the vehicle to attain a speed of 10km/h on water.

"BMP-3F’s fire control system enables effective engagement of a variety of targets during day and night at halt and on the move."

The vehicle can attain a road speed of 72km/h, can move backwards at a speed of 20km, and has a range of 600km. It can execute continuous amphibious operations on water for seven hours with the running engine.

The Indonesian armed forces received the first lot of 17 armoured personnel carriers (APCs) for the Indonesian Marine Corps at its military base on the east coast of Jawa in December 2010. The vehicles were delivered as part of an intergovernmental agreement signed between Indonesia and Russia in September 2007.

The Indonesian Ministry of Defence (MoD) signed a $114m contract with Russian state-controlled arms exporter Rosoboronexport for the supply of an additional 37 BMP-3F marine vehicles in May 2012 and the vehicles were delivered in January 2014.