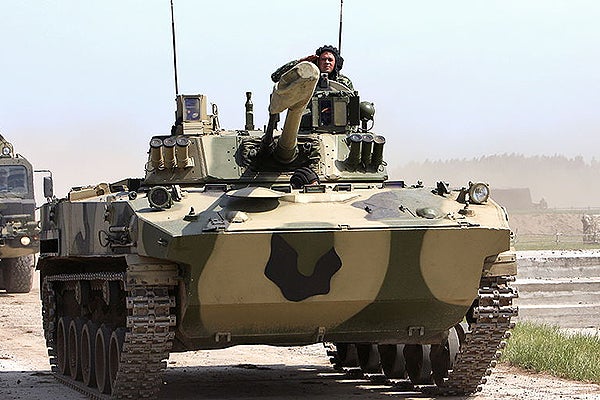 The BMD-4M is a new generation amphibious infantry fighting vehicle (IFV) manufactured by Kurganmashzavod JSC, for the Russian Army. The vehicle provides improved protection and support for the airborne troops.

The BMD-4M vehicle underwent a complex test according to an agreement signed by Russia’s General Tank-Automation Command of the Ministry of Defence and airborne troops (VDV) in 2008.

The IFV was demonstrated in March 2008 and exhibited during the Russia Arms Expo (RAE) in September 2013. The vehicle officially entered into service with the Russian Army in April 2016.

The BMD-4M armoured infantry fighting vehicle was developed by Volgograd Tractor Plant and the Tula KBP Instrument Design Bureau. It is the modernised variant of the BMD-4 airborne combat vehicle. The upgraded IFV vehicle has a length of 6m, width of 3.15m and height of 2.7m. The combat weight of the vehicle is 13.5t.

The new IFV features more spacious hull compared to its predecessor. The manned compartment accommodates up to two crew and six infantrymen. The driver is seated in the front and the engine is placed at the rear part of the hull.

Armament and protection of BMD-4M IFV

The airborne assault vehicle is armed with a 100mm 2A70 semi-automatic gun / missile launcher weighing 332kg.

The 2A70 gun is coupled to a highly reliable 30mm 2A72 automatic cannon mounted on the turret. It can fire GSh-6-30 rounds with a muzzle velocity of 960m/s. The rate of fire is more than 300 rounds per minute. The launcher can fire either 3UOF17 or 3UOF19 rounds at a rate of ten rounds a minute. Its muzzle velocity ranges from 250m/s to 355m/s.

The secondary armament of the vehicle is a 7.62mm PKT coaxial machine gun, which can fire Arkan Tandem 9M117M1 and Konkurs anti-tank guided missile (ATGM) systems.

The turret is also equipped with three smoke grenade dischargers each side at the front.

The vehicle is equipped with bullet-proof armour protection. The all-welded aluminium chassis and turret protect the crew and infantrymen from small arms fire.

The weapon system is integrated with an improved fire control equipment to provide the IFV with the ability to track and engage the targets while on the move. The fire control system incorporates a gunner’s sight to identify the targets during both day and night, a commander’s panoramic TV-aimed sight and an automatic target tracker.

The BMD-4M is powered by a multi-fuel, type UTD-29 diesel engine that produces a power of 500hp.

“The turret is also equipped with three smoke grenade dischargers each side at the front.”

The armoured vehicle offers superior mobility in all terrains, thanks to increased track length and reduced ground pressure. It can accomplish a speed of 69.4km/h on highways and 10km/h afloat. It has a cruising range of 500km on highways. The ground clearance ranges from 130mm to 530mm.

The running gear and the chassis control system of the upgraded vehicle include more power-plant installation units. The chassis is also incorporated with control linkages, pumping devices and water jet propellers used in BMP-3 amphibious IFV.

The BMD-4M can be dropped from airplane using a parachute platform. It can also drive through the water.

STEYR MOTORS
STEYR MOTORS is the specialist for diesel engines out of...
SUBSCRIBED