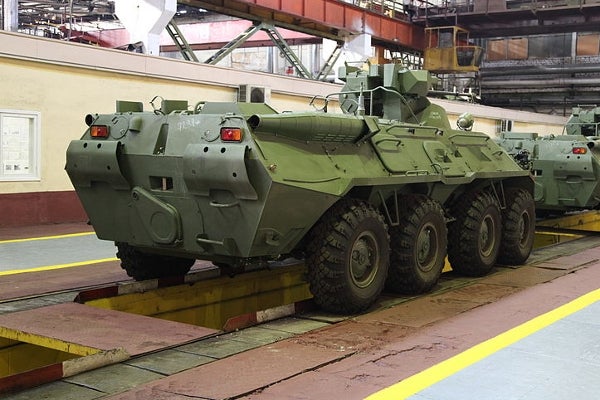 The BTR-82A is an advanced 8×8 wheeled armoured personnel carrier (APC) being manufactured by Military Industrial Company of Russia for use by the armies of Russia and Kazakhstan.

The first prototypes of the vehicle were unveiled in December 2009. The APC’s features were demonstrated during the 15th Interpolitex State Security Materiel Show at the All-Russia Exhibition Centre in Moscow in October 2011. It was also displayed at the Russian Expo Arms 2011 show in Nizhny Tagil.

The Ministry of Defence of the Republic of Kazakhstan accepted 30 new BTR-82A combat vehicles in December 2012. The vehicles were deployed with the military unit 25744.

Production of the BTR-82A APCs for the Russian Army was started in September 2013. The first batch of APCs was delivered to Azerbaijan in 2013.

Design and features of BTR-82A APC

The BTR-82A APC was developed based on the design of BTR-80A. The vehicle offers improved protection capabilities than its predecessor.

The APC measures 7.65m in length, 2.9m in width and 2.8m in height. It weighs 15,400kg and accommodates up to three crew and seven troops. The cabin is fitted with new seating and air-conditioning system to provide more comfort for the occupants.

The secondary armament of the vehicle includes a 7.62mm PKTM coaxial machine gun. The turret incorporates two-axis stabilisation, new sighting channels, and three forward-facing 81mm smoke grenade launchers on each side. The firing elevation ranges from -7° to +70°.

The gunner’s station is equipped with TKN-4GA day / night fire control system. The commander is provided with advanced communications and topographic maps. The TKN-AI surveillance camera with laser range finder ensures the commander to detect enemy targets within the range of 3km.

The armoured hull of the APC is made up of Kevlar laminated synthetic material to provide ballistic protection. The reinforced floor with multi layers offers protection against improvised explosive devices (IEDs) and mine blasts. The spall liners inside the vehicle armour also protect the crew against explosion.

“The commander is provided with advanced communications and topographic maps.”

The APC features a special suspension with energy-absorbing properties to provide increased protection for the personnel from mine blasts. It is also fitted with an overpressure nuclear, biological and chemical (NBC) protection system.

Engine and mobility of BTR-82A APC

The BTR-82A is powered by KAMAZ 740.14-300 turbo diesel engine, which generates a power of 300hp. The vehicle can accomplish a maximum speed of 100km/h on road and has a maximum range of 600km. The upgraded transmission components ensure increased average speed on uneven surfaces.

The fully amphibious vehicle also integrates a central tyre-pressure monitoring system and is propelled by a water-jet when on the water.