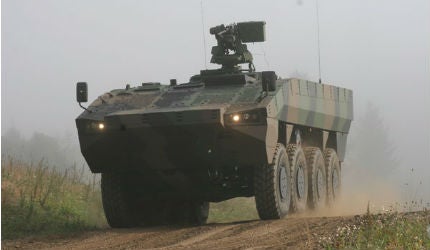 The Havoc is an 8×8 armoured modular vehicle (AMV) manufactured by Lockheed Martin for the US Marine Corps (USMC). The multi-mission combat vehicle was developed based on the technology of the Patria 8×8 AMV. The Havoc AMV offers greater mobility and safe transportation for its troops.

The AMV incorporates high protection systems and heavy weapon stations, and can transport troops and payloads quickly with high payload capacity on land and sea.

Lockheed Martin and Patria entered into a teaming agreement in October 2007 to contend for the MPC programme of the USMC. Under the agreement, Lockheed Martin acts as a prime contractor who is responsible for system integration and production of new vehicles based on the Patria AMV.

Lockheed Martin secured a $3.5m contract from the USMC in August 2012 to carry out evaluation of the Havoc vehicle and perform testing of its protection systems as part of the Marine Personnel Carrier (MPC) programme for eight months.

Lockheed Martin completed swim and human-factors testing of amphibious Havoc in and near the surf at Marine Corps Base Camp Pendleton, California, in March 2013. Havoc’s safety and protection systems were evaluated at the Nevada Automotive Test Centre in Carson City, Nevada.

During the tests, the vehicle was fully loaded with a Marine Corps battle gear for the crew and demonstrated its resistance to water penetration.

"The vehicle was fully loaded with a Marine Corps battle gear for the crew and demonstrated its resistance to water penetration."

Along with Lockheed Martin, three other companies also received contracts worth $3.5m each for the evaluation and testing of their vehicles in the MPC programme. The vehicles include BAE Systems’ SuperAV 8X8 MPC, Science Applications International Corporation’s Terrex 8×8 armoured wheeled amphibious vehicle, and General Dynamics’ MPC.

The Havoc is based on the chassis of Patria AMV and features a spacious crew compartment carrying two crew members plus nine troops. The modular design of Havoc allows for the integration of a variety of weapons and mission systems according to mission requirements.

The maximum internal volume of the vehicle is 12.3m3. The vehicle can operate in the network of NATO group of vehicles.

Havoc is easy to maintain and features a reduced logistics footprint. The vehicle can be reconfigured for use as a mobile medical unit or repair and recovery vehicle.

The crew of Havoc AMV can be protected against a number of extreme threats. The vehicle can be equipped with an armour protection system to STANAG 4a/4b level for protection against mine blasts and improvised explosive devices (IEDs).

The Havoc AMV is powered either by a standard commercial diesel engine or an engine burning JP-8 fuel. The engine, mated to an automatic transmission system, produces 540hp of power and 1,500ft-lb of torque. Power to weight ratio of the vehicle is 20.1hp/t.

The Havoc AMV can accomplish a maximum speed of 104km/h and an operating range of 901.2km. The combat-proven vehicle can survive in any environment, and can be operated at sea state 2 and cross inland water obstacles without any preparation.

The vehicle is able to negotiate 60% forward and 30% side slopes. It can cross a trench of 2.1m width and a vertical obstacle of 0.7m, and can ford to a depth of 2m.

The Patria AMV (armoured modular vehicle) was developed by the Finnish company Patria Vehicles in close cooperation with the Finnish Defence Forces.