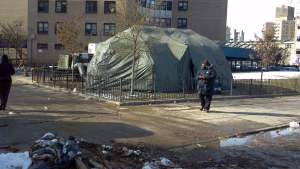 Hurricane Sandy was devastating for residents throughout the Northeast. Homes and businesses were destroyed and many feared how the storm’s aftermath would affect them in times ahead. DHS Systems LLC, creator of the Deployable Rapid Assembly Shelter (DRASH), discovered that its DRASH equipment was an asset to military and civilian agencies involved with Sandy relief efforts. DRASH equipment served a variety of purposes in areas most affected by the storm.

One purpose in particular helped bring out the spirit of community and recovery. A DRASH TMSS Medium (demo system) was set up in Coney Island, Brooklyn as a mobile food kitchen for the Friends Healing Ministries. The organization’s mission is to and to heal and restore communities, and to prepare its members for emergency response situations.

Reverend Jordan, Director of the Friends Healing Ministries, had this to say about DRASH, "The shelter was heaven-sent. We were able to commune in the shelter; it was a warming shelter and a distribution shelter for food. It served in so many ways and became home for so many Coney Island residents." She further stated, "DRASH representatives, Scott Jackson and Willie Craig, came to set up for the Nor’easter. It was very cold and they worked so hard; it was so moving to see that. They were totally selfless. What they did for us is what DRASH is all about and we thank them."

The storm hit a month ago, and government agencies are still working to repair the damage. On November 21, 2012, DRASH representatives brought a DRASH D-1000B heater to Fort Wadsworth on Staten Island, NY, for use inside a tent where the National Park Service (NPS) served Thanksgiving dinner to crewmembers.

John Wood, the Response Team Logistics Team Leader said, "With the temperatures we were faced with at the time, it was very beneficial for us to have enough heat in the food tents. It is a great boost to moral to have a nice warm environment for the crews since they work early in the morning to late in the evening, away from the comfort of home and family". The National Park Service has crews working "14-16 hour days, seven days a week" for Sandy relief, according to an NPS representative. Because of the long hours, many crewmembers could not celebrate Thanksgiving with their families. The NPS rep. further remarked, "The availability of good food served in a safe, warm environment is essential to this end."

DRASH representatives were prepared to help any organization that needed assistance with setting up equipment before or after the storm. Scott Jackson, DRASH representative and AOR East Business Development Leader commented on DHS’ involvement stating, "Many of our customers deploy their DRASH equipment during natural disasters response. We have a long history of being right there with them to make sure their mission is successful."