8 missiles in less than 3 minutes 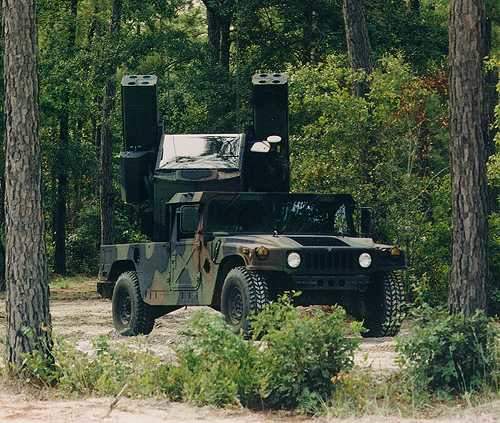 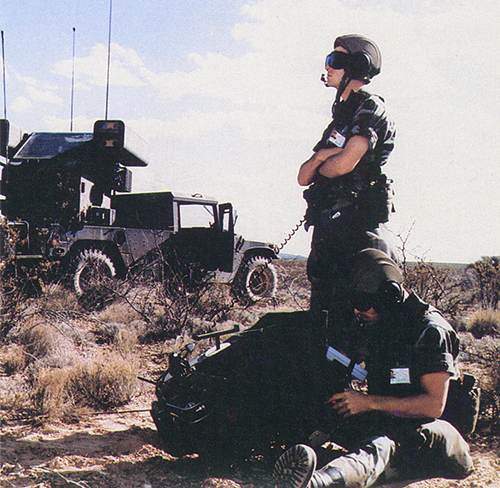 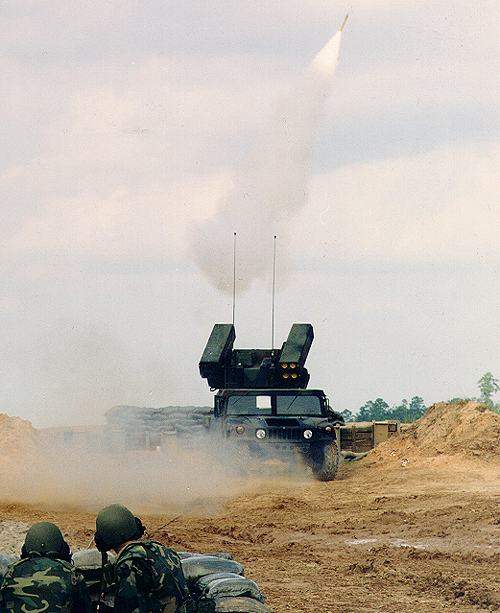 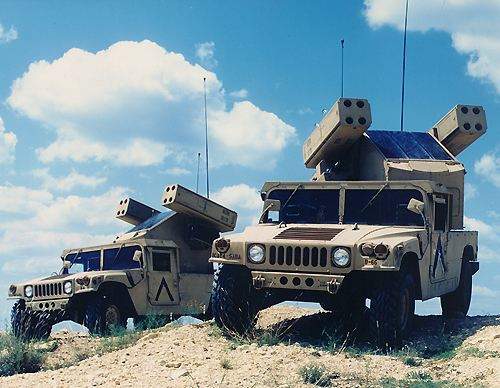 The Stinger missile has a 3kg high-explosive fragmentation warhead, with a maximum speed of Mach 2.2. 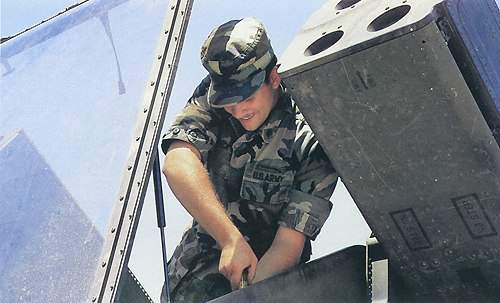 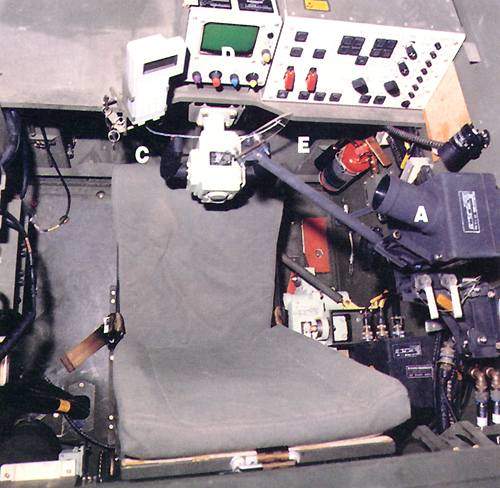 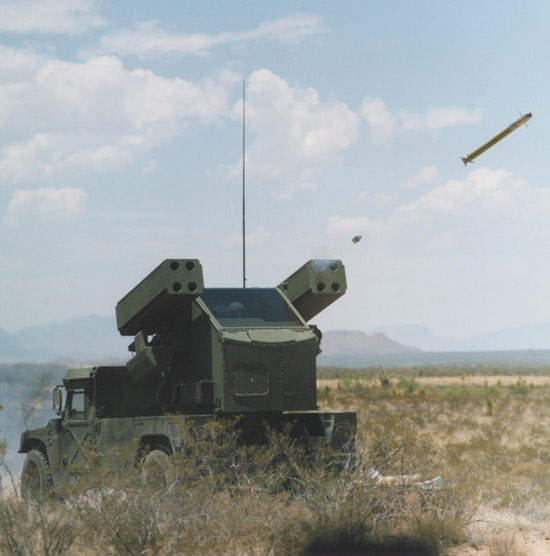 Around 800 Avenger air defence systems are in service with the US Army.

The Avenger air defence system, built by Boeing, forms an important element in the US Army’s forward area air defence (FAAD) architecture, which includes C2I, radars, platforms and missiles. The first production contract for 325 units was awarded in 1987.

The gyro-stabilised Avenger turret with Stinger missiles is mounted on a 4×4 HMMWV (high-mobility multipurpose wheeled vehicle), but can also operate in a standalone configuration or mounted on a variety of military vehicles. Avenger has a crew of two – gunner and driver.

"The Avenger system is fielded worldwide with the US Army, Marine Corps and Army National Guard.

Taiwan has 70 systems and Egypt 50 systems. In June 2006, Boeing was awarded a Foreign Military Sales contract for an additional 25 Avenger units for Egypt. Deliveries are to begin in early 2008 and conclude by September 2008.

Boeing has developed the Laser Avenger, which has a 1kW laser mounted on the Avenger vehicle, in addition to the missile system and machine gun.

The Laser Avenger is designed to be effective against improvised explosive devices (IEDs) and unexploded ordnance (UXO). In September 2007, Boeing successfully carried out test firings of the system.

In December 2008, at White Sands Missile Range, New Mexico, Laser Avenger acquired and tracked three small UAV targets and shot down one of the three.

The Avenger system is fielded worldwide with the US Army, Marine Corps and Army National Guard. It was first deployed in 1991 to support NATO troops during Operation Desert Storm and has also been fielded in Bosnia and South Korea.

A number of Avenger systems were deployed during Operation Iraqi Freedom in March / April 2003, where, as well as providing air defence, they also contributed to ground security.

In April 2005, eight Avenger vehicles in service in Iraq were modified for the ground security role. The right missile pod was removed and the M3P gun moved to the missile pod’s position, enabling 360° firing at any angle or elevation.

An Avenger slew-to-cue upgrade kit has been developed to permit the existing link between the US Army FAAD command and control system to automatically slew the Avenger turret, placing the target in the gunner’s field of view.

First test firings of the upgrade, which gives beyond visual range engagement (BVRE) capability for the Stinger missile, took place in April 2001. The upgraded systems entered service in 2002. The upgrade was due to extend to the entire fleet but funding for the programme was cut for FY03.

The electric turret drive is the same as that used on the Bradley Fighting Vehicle and is manufactured by General Dynamics, Pittsfield, Massachusetts.

Avenger carries eight Raytheon Stinger short-range air-defence missiles in two launch pods mounted either side of the turret. These pods have a range of elevation from -10° to +70°. Missile reload time is eight missiles in less than four minutes.

The current production Stinger missiles are the RMP (reprogrammable microprocessor) FIM-92D and the Block I FIM-92E. The Stinger missile has a two colour, infrared-ultraviolet rosette scan seeker, a 3kg fragmentation warhead, a maximum speed of Mach 2.2 and a maximum range 8km.

The Block I missile has a new roll frequency sensor and an improved processor. Funding for the Stinger block II missile, with an imaging infrared seeker based on a focal plane array, was halted in 2002.

Avenger is equipped with a .50-calibre M3P automatic machine gun to cover the missile dead zone and engage ground targets.

The machine gun, manufactured by Fabrique Nationale Herstal of Belgium, is mounted on the right launch beam with its ammunition magazine fixed on the right side of the turret below the gun barrel. 200 rounds of ammunition are carried. The gun is recoil-operated, link-belt fed and air-cooled.

The fire control system is highly automated, including automatic insertion of lead angle and super elevation at missile launch. The gunner’s station has a head-up CA-562 optical sight produced by CAI division of Recon / Optical, Barrington, Illinois. Missile seeker activate, uncage and fire permit indications are projected on the sight glass. Driven reticles confirm the missile seeker is locked on to the same target the gunner is tracking.

Targets are acquired either by using the optical sight or the Raytheon AN/VLR-1 Avenger FLIR (forward-looking infrared). The FLIR sensor is fitted to the left launch beam and is boresighted to the aiming point of the missile pod. The FLIR has three fields of view – wide, narrow and a rain mode.

The Avenger control electronics (ACE) unit, produced by General Dynamics, Burlington, Vermont, is the Avenger main computer. The ACE is located beneath the console in the gunner’s station.

A Raytheon eyesafe CO2 laser rangefinder provides range data which is processed by the ACE. An automatic video tracker (AVT), produced by DBA, Melbourne, Florida, is located under the gunner’s console, with its tracking box on the FLIR display. The autotracker locks on to the target and provides a tracking signal to the ACE for control of the turret in elevation and azimuth. An AN/PPX-3B IFF (identification friend or foe) system is also fitted.

The remote control unit (RCU), also produced by General Dynamics, displays the same data available to the gunner, including the FLIR monitor display. It enables the crew to conduct engagements from remote positions up to 50m from the fire unit.