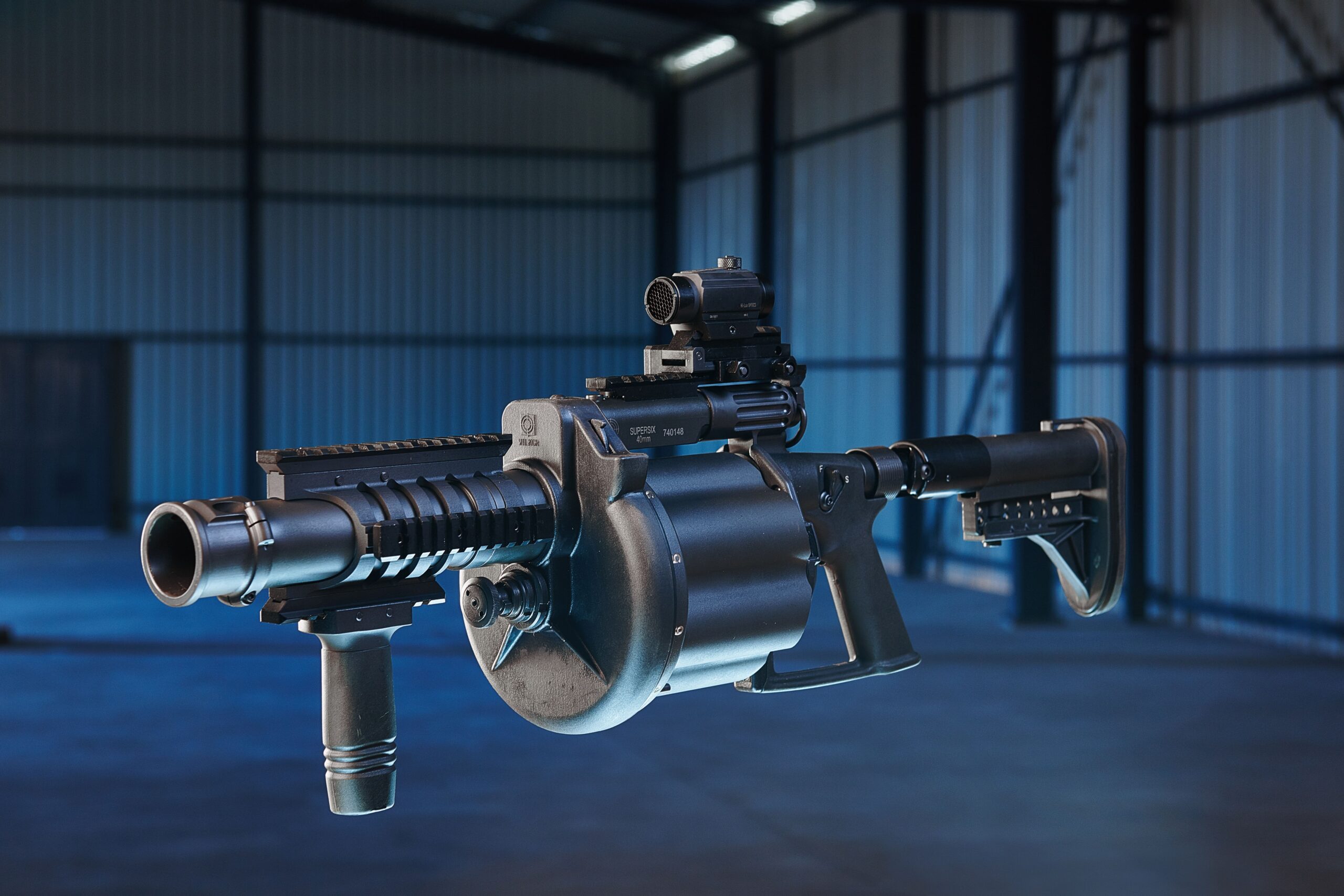 Milkor, a South African based defence group, established itself in 1981 and gained widespread popularity due to their design and development of the first 6-shot 40mm MGL (Multiple Grenade Launcher). Since then, Milkor has expanded their weapon range significantly, improving the capabilities of armed forces worldwide.

Milkor has been steadily developing and expanding their arsenal of weapons, which includes their flagship the SuperSix MRGL, single shot grenade launcher the Stopper Convertible, the Under Barrel Grenade Launcher (UBGL) and MAR (Multi shot anti-riot). Each weapon has meticulously been developed by end user feedback in combination with expertise of Milkor’s in house weapons design experts, ensuring weapons that are designed to the highest standards. Having supplied their weapons to more than 60 countries worldwide, Milkor’s weapons platform has already proven its capability in the field.

The SuperSix has the capability to fire 40mm less lethal, Low and Medium Velocity NATO ammunition in quick succession. With the effective range of lethal ammunition ranging from 30m to 800m (ammunition dependant) the SuperSix enables the operator to have a strategic advantage in scenarios ranging from Guerrilla and CQB type combat to medium range defensive and offensive operations compared to a traditional small calibre rifle.

With the evolution of 40mm High Explosive Dual purpose (HEDP) ammo a soldier is able to engage a wide variety of targets from demobilising and penetrating wheeled vehicles to anti-personnel applications. With skilled operators being able to fire 6 rounds in 3 seconds, one is able to or cover a large area with lethal shrapnel very effectively. Even in its shortest-range configuration, the SuperSix is a far more versatile weapon in terms of effective range, fire rate and area coverage to other explosive projectile platforms for example the RPG. Loaded with HEDP ammunition, and thus having a lethal radius of 5m and armoured steel penetrating depth of 50mm the Super Six is an invaluable tool in the arsenal of special forces, border patrol, vehicle and infantry squads alike.

In situations where a grenade launcher (GL) would be beneficial, but the operation is not ideal for primary carry, the Stopper Convertible can easily be equipped as a secondary weapon due to its size and lightweight design. At just 2.1kg its compact size makes it the ideal addition to any operation, with skilled operators being able to fire up to 12 rounds per minute at ranges up to 400m. The Stopper Convertible is able to fire less lethal 37/38mm and 40mm Low Velocity rounds, making it ideal for gendarmerie and tactical forces in urban operations.

The Under Barrel Grenade Launcher (UBGL) is Milkor’s assault rifle rail mounted grenade launcher. Milkor’s UBGL is able to mount and dismount fast and effectively due to the unique attachment mechanism used. The UBGL can be mounted onto MIR STD 1913 picatinny rails, however Milkor does also offer mounting to various other gun platforms, most notably the AK family. At just 1.1kg the UBGL is one of the lightest under barrel grenade launchers on the market. The UBGL has a unique swing open loading and recocking method, which increases reliability, but this design also moves the centre of gravity (COG) more towards the centre of the rifle, increasing the stability and ease of operation. The option between left hand and right-hand reloading combined with the button-trigger and safety mechanism ensures the operator can fully operate and shoot the weapon without altering their normal rifle grip. The UBGL also enables the operator to engage a threat whose position is known, rather than having to directly hit the target as with a rifle.

Milkor has proven itself with the development of the first MGL, but with the expansion of their now impressive weapons arsenal they also prove that they are able to keep up with the demand and ever-changing battle conditions, to provide their clients with the force advantage no matter the circumstances.