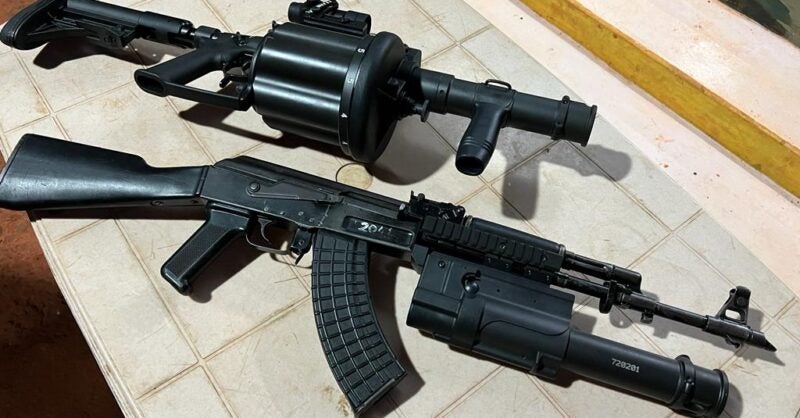 Milkor is continuously expanding their weapon division by growing their customisability to satisfy even more end-user requirements. These customizations include a variety of sight and elevation systems on their existing 40mm grenade launcher range as well as modifications to the Under Barrel Grenade Launchers (UBGL).

Conventional operation using the standard Range-Plate Sight requires keeping both eyes open when aiming the weapon. Using this proven technique, the operator improves their situational awareness of the set scenario in which the weapon is being fired. Milkor received a weapon requirement, from an end-user, to enable the operator of the weapon to aim down the sight with one eye open without any obstruction from the barrel, thus the Offset Sight was developed. Designed and delivered within a short time frame, the feedback received during testing proved extremely valuable. This sight enables the operator to aim past the weapon barrel at all elevations in a one eye closed fashion as with most assault rifles. This development illustrates the capability of Milkor to customize their weapon solutions to suit end user requirements. This provides users with an alternative aiming platform which can be used with a variety of sight options.

The Under Barrel Grenade Launcher (UBGL) has been improved since the original introduction of the secondary weapon to the market. Continuous feedback and collaboration from various end-users and their in-field operational experience plays a vital role in remaining at the forefront in the 40mm weapons sector. Embarking on a new development to include the Milkor UBGL to be fitted to all assault rifles, including the ever-popular AK-47, new adapters have been developed and tested resulting in an advanced solution to provide additional firepower to modern and older generation assault rifles. Additional features upgrades include the increase of the effective range up to 400 metres and the alternative to open the secondary weapon either to the right or the left for reloading.

Constant research and development have allowed Milkor to have the ability to manufacture and supply world-class 37/38mm and 40mm weapons, which cover a range of applications from less-lethal, low, medium, and high-velocity ammunition. The design and manufacture of the weapons are performed in-house therefore enabling the development of unique and bespoke solutions to suit specified end-user requirements.

Milkor will exhibit these weapons at the Africa Aerospace and Defence Expo 2022, where they are also the Diamond Sponsor. The event will take place from September 21 to September 25 at the Waterkloof Airforce Base. Milkor will also showcase their capabilities in the categories of air, land and sea at the exhibition, and can be located at stand 4W5 in Hall 4.