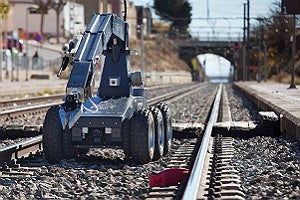 Authorities have chosen PROYTECSA SECURITY for prevention and counter IED measures through the acquisition of aunav.EOD robots, purchased several weeks ago. Delivery will occur by the end of September.

PROYTECSA SECURITY CEO, Rafael de Solis, declared the sale puts an end to an extraordinary year for the company, in which we had the best results in our 25 years of history, breaking our own records thanks to the exportation and the trust of our customers. Besides, we could open up new markets in some of the most important areas in the entire world, such as the Indian subcontinent, North Africa and the Near East.

The aunav.EOD robot was designed and developed in collaboration with Spanish National Police Force and EOD units to fight terrorism. This EOD robot has been used by several Spanish Security Corps since 2003, such as the national police, the civil guard, the army, the air force and the Catalan Police Corps.

Thanks to their efficiency and reliability, as time went on the number of customers that use our robots increased to countries such as Angola, Chile, Morocco, Mexico, Saudi Arabia, the United States of America and Vietnam, among others.

The aunav is a highly sophisticated, medium-sized robot designed for explosives disposal. Its enormous capacity to carry weight combined with its high precision allows bomb disposal experts to respond effectively when facing situations involving CIED activities. They are perfect to be used in police and military operations to defuse improvised explosive devices (IED) and Explosive Ordnance Disposal (EOD), as well as for CBRN activities.

Aunav.EOD can lift more than 250kg and has a dragging capacity of up to 800kg, with a pinpoint precision and a force of more than 70,000 Newton in its gripper. Its size allows it to go through doorways 70cm wide. This deal allows PROYTECSA SECURITY to export to the Indian subcontinent for the first time, as well as including it as a reference on the list of aunav series robots clients.