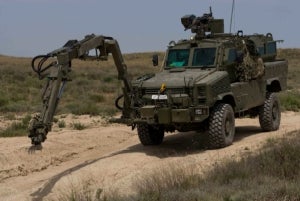 Spanish company Proytecsa Security will attend Milipol 2015, the international tradeshow on security, which takes place in Paris on the 17-20 November, with its range of ROVs to deactivate IEDs and CBRN prevention.

During the last 15 years, Proytecsa, together with IED/EOD specialists, has constantly improved its ROVs for anti-terrorism warfare.

Thanks to its close collaboration with universities and technological centres to evolve robotics applied to security and defence purposes, Proytecsa has developed new robots and projects to be displayed at the French tradeshow.

Proytecsa CEO Rafael de Solís said: "We will attend with our new robot aunav.next, recently certified common criteria with a guarantee level EAL2+. This certification guarantees the security and reliability of the aunav.next robot, the first EOD/IED robot in the world to receive that award."

Proytecsa collaborates with Aragón Hydrogen Foundation to develop an IED/EOD robot powered by an integrated hydrogen cell, and thus increase the range, improve the efficiency and reduce environmental impact.

Tradeshow visitors will also discover the new version of the aunav.CID robot interrogator arm, especially designed for the Spanish Army. This tool is capable of handling IEDs; one of the biggest threats our soldiers have to face and the one that causes the most casualties among the troops who are deployed for international operations.