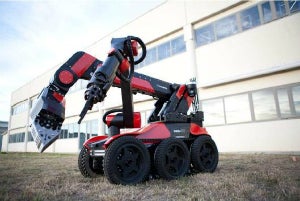 The Civil Protection Authorities of Egypt have acquired the latest generation of aunav.NEXT from the Spanish company.

This robot is specialized in explosive device deactivation. It is the perfect evolution after more than ten years of technological development and innovation performed by PROYTECSA SECURITY.

The robot is the first on the market that features two synchronized arms that allow operations simply not feasible with others. It is designed to move around automatically, and thanks to its traction system that combines wheels and tracks, it can do so over any kind of terrain, rocky, sandy or asphalt.

This new model of robots is a leap forward in the sector, according to PROYTECSAS’ international commercial manager, Raoul Dominguez, who said: "We are very satisfied with this last sale because it allows us to keep going forward with the strategic internationalisation of the company."

"Our priority is to satisfy the needs of the customers that trust our work and solutions".

The aunav robots have been developed in conjunction with the TEDAX units of the Spanish National Police.