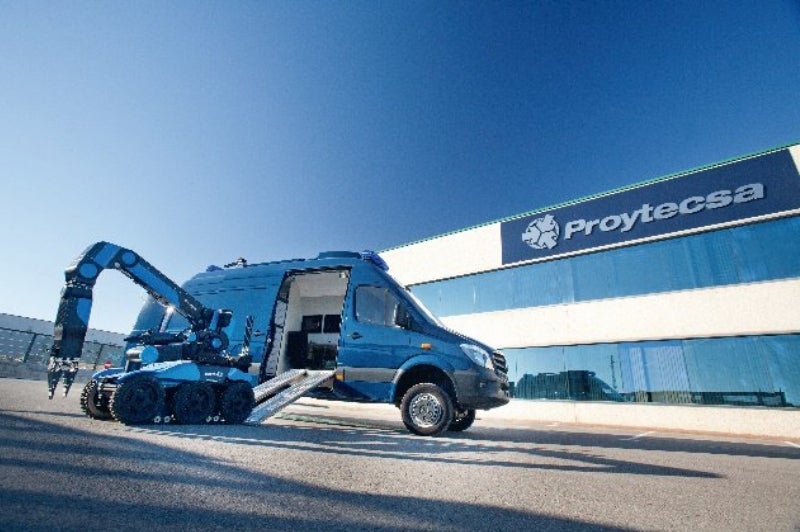 The escalation of terrorist attacks in the last few years has impelled the different EOD / NRBQ units to be prepared to deploy quickly at any time, any situation and any place while carrying all the necessary equipment to successfully perform deactivation and neutralising missions concerning IEDs and NRBQ threats (nuclear, radiological, biological and chemical), while at the same time guaranteeing and protecting the safety of the population and infrastructures.

Proytecsa has designed, developed and manufactured the Aunav.VAN based on the Sprinter model by Mercedes. The inside has been reconditioned with special steel lockers to be able to safely transport all the necessary equipment to the ops site. The 100L fuel tank and 4×4 traction system allow a long-range deployment over any type of terrain, which confers the vehicle and all-purpose operational capability. It is fitted with a silent 7.2kW generator to power elements such as the control centre, air conditioner or roof mast.

Once arrived to the intervention destination, the Aunav.NEXT robot is deployed and begins operations (in less than five minutes thanks to the QuickStart system). The robot Aunav.NEXT is truly multi-purpose, capable of carrying several accessories such as disruptors, guns, tools, X-ray systems and NRBQ sensors to perform all types of missions in any conditions.

The Aunav.NEXT features two arms that can both rotate 360º continuously, and has a lifting capacity of 250kg. They are extremely precise, and feature a user-friendly system for the operator called ‘grip tip based movements’, which coordinate the movements of several articulations at the same time in order to place the grip in the desired position.

Once the robot is deployed, the operator takes control from inside the control centre installed in the Aunav.VAN (with COFDM communications). He deploys the robot mast fitted with LED lighting and a pan-tilt-zoom (PTZ) infrared camera that allows the operator to monitor the surroundings of the operation, and on another screen visualises in real time the eight video flows of the cameras fitted to the robot.

The Government of the Republic of Tunisia has placed its trust in the Spanish company...