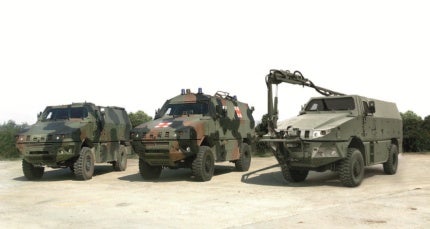 The Defence and Security Equipment International (DSEI) 2015 exhibition, which runs from 15-18 September, will again provide Iveco Defence Vehicles with the opportunity to showcase the most significant developments within its extensive product range and highlight its latest commercial successes.

On show at the Iveco Defence Vehicles stand will be the highly successful, new-generation, light multirole vehicle (LMV), the VBTP amphibious armoured vehicle and the new Trakker 8×8 EuroVI.

The Land Vehicle Zone will also feature a selection of Iveco Defence Vehicles’ products, including a route clearance variant of the Medium Protected Vehicle (MPV) and a 6×6 truck from the high-mobility range.

Each of these vehicles has been developed to meet individual requirements identified by customers and demonstrates Iveco’s ability to adapt and exploit state-of-the-art engineering techniques and technologies to develop new vehicle capabilities.

VBTP 6×6 – Amphibious armoured vehicle
These new armoured vehicles have been developed jointly by Iveco and the Brazilian Army (DCT – Department of Science and Technology) following a frame contract signed in December 2009 for a total of 2,044 VBTP-MR vehicles. The frame contract value exceeds €2bn and deliveries, which commenced in 2013, will be spread over a period to 2030.

LMV – Light Multirole Vehicle 4×4
Since it was launched, the Light Multirole Vehicle (LMV) has been the subject of continuous development and innovation to meet the ever-changing operational requirements of its users. The company therefore implemented a programme of product development, which focused on delivering incremental improvements, usually based on lessons learned in the field, whilst maintaining the integrity of the basic design.

New Trakker 8×8 Euro VI compatible with military single fuel operations
The Iveco Trakker range has an excellent reputation for both its on-road and heavy-duty applications and has proved particularly suitable for military applications. The vehicle is compatible with military single-fuel operations, available in a large number of variants and can be fitted with an armoured cab.

The Trakker range is particularly flexible in respect of its drive configurations (including 4×4, 6×6, 8×6, 8×8 and 10×8), engine ratings, cabs (day / sleeper / protected), transmissions and wheel bases. Its inherent durability and ease of use have proved particularly attractive to military users. The Trakker is currently utilised by five leading NATO countries, with the protected variant being in service with the British, German and Swiss Armies.

The Land Vehicle Zone demonstrates the latest capabilities from the major vehicle manufacturers in the defence industry.

High mobility 6×6
The High Mobility Truck 6×6 on display offers exceptional mobility and fording capability to provide tactical support to any military operation in the most hostile environmental conditions. The whole range can be equipped with a new generation of appliqué armour kits providing both anti-mine and ballistic protection.

MPV – medium protected vehicle 4X4
The development of the MPV dates from a co-operation agreement signed in 2008 between Iveco Defence Vehicles and Krauss Maffei Wegmann (KMW) of Germany for the development of a new range of military vehicles in the 18 to 25 tonne class. Since then, the MPV has evolved significantly with 4×4 ambulances, route clearance and troop carrier vehicles currently in production.

For more information about Iveco’s participation at DSEi 2015, please visit the company website.

On 24 January 2014, the Division of General Armaments (DGA) of the French Ministry of...