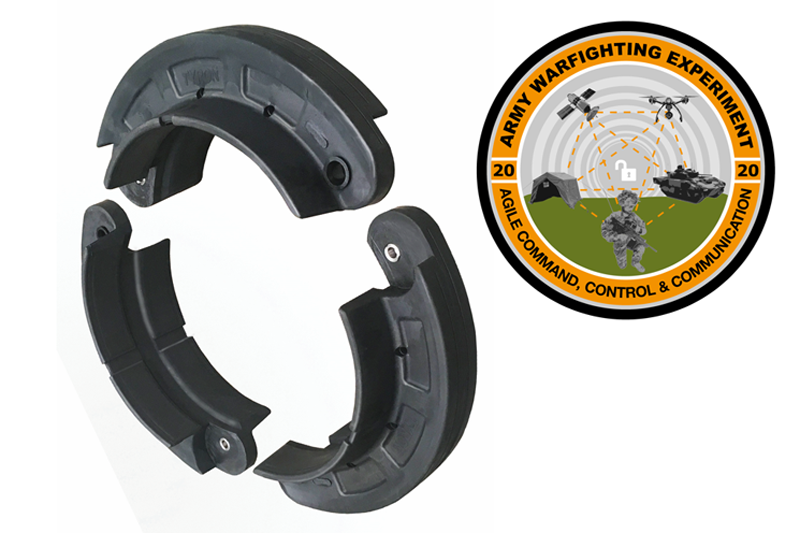 Tyron Runflat is pleased to announce its progression to the fourth stage of the British Army Warfighting Experiment (AWE) 2020.

AWE20 acts as a capability spotlight to allow the army to explore emerging and innovative technologies that may be suitable for rapid exploitation to meet land force requirements and overcome the challenges of the modern battlefield.

Tyron is one of around 80 submissions that have made it through an initial Dragon’s Den competition and two industry days with its market-disrupting multi-piece rubber runflat tyre solutions for military armoured vehicles, designed to keep a vehicle mobile in the event of a tyre strike caused by IED or ballistic attack.

As Tyron runflat systems are made from rubber, they offer military vehicles a number of practical benefits in the field; namely, rubber absorbs shock from impingement caused by curb strikes, potholes and operating in a hostile environment, and drastically reduces the vibration and stresses that are transmitted through the runflat to the wheels, axles and drive shafts. Secondly, rubber is a compliant material and therefore prevents the damage caused to the tyre from impingement between the runflat and the inside of the tyre. As a result, rubber minimises the damage to the inner liner, body plies and/or bead areas of the tyre that can be caused by runflats made of rigid materials such as plastics/composites – damage that may eventually lead to the splitting, blistering, bulging and/or separation of tyre structural plies and pressure inflation loss or tyre failure.

“The advantages of rubber runflat solutions translate into a clearly-defined advantage on the modern battlefield, where the threat to armoured vehicles by IEDs and similar continues to be significant,” Peter Simson, Director at Tyron, said. “That advantage is simple – our technology keeps vehicles moving beyond defined military standards of 50km, preferably 75km with two or more tyres deflated and a minimum of two hours off-road negotiating hills and obstacles like curb strikes. In other words, we get vehicles and their crew back to base.”

With an eye to reducing the logistics footprint of the army, Tyron is also targeting the need for field serviceability and flexibility of use in service with its modular runflat systems that are field mountable and demountable, and don’t require a hydraulic press to squeeze the runflat into the tyre.

“The reality is that military forces are still having to manage huge logistics tailbacks for their armoured vehicle tyres in theatre – including having to fly wheel structures to the nearest base to replace the tyre when it is damaged, because the equipment to replace the tyre is not mobile or transportable,” Peter Simson explained. “That is why what we are demonstrating to the British Army at AWE20 is game-changing technology: rubber runflats that keep vehicles moving and can be replaced in the field with standard tooling and equipment.”

The next stage is “AWE Summer 20” during which fit and function trials which will allow participants to demonstrate equipment for the army.

Since 1977 Tyron has been developing a range of tyre safety features which are designed to keep vehicles moving safely at speed and for distances well in excess of standard requirements. In the early 1980s Tyron was contracted by the UK MoD to develop a range of steel bands for the Land Rover steel wheels. These are now marketed as Tyron Multibands and are fitted to leisure, commercial, security and military vehicles.

In 2008 Tyron invented the world’s first ever multi piece rubber runflat, the All Terrain Runflat (ATR) insert, which can be fitted in the field to both military split rims and ordinary tubeless wheels, giving excellent off road mobility with run flat capability of up to 100km which far exceeds the Finabel standard.  Since then Tyron has continued developing its range, including new Beadlocks, heavy duty alloy and steel wheels plus the ultimate range of single and multi-piece runflats which includes a new innovation using Carbon Fibre to develop the lightest rubber runflat in the world.