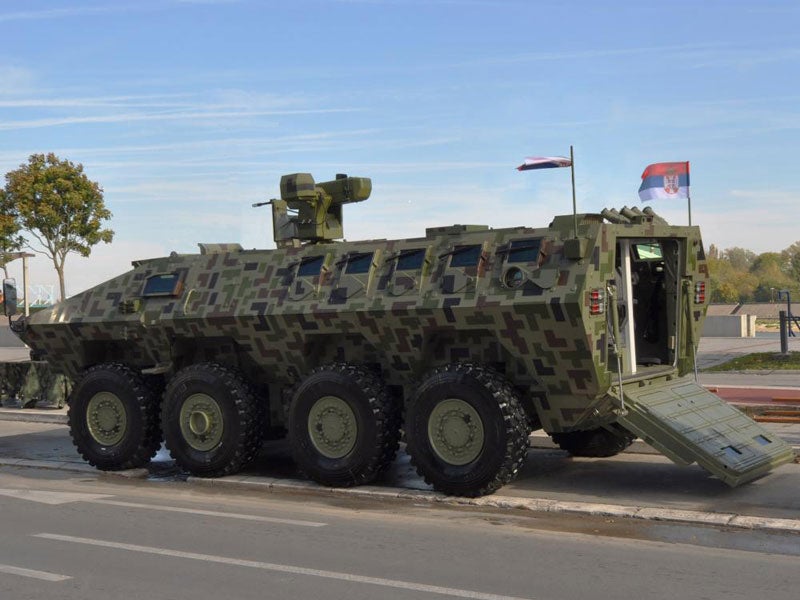 Based on wheeled chassis, the vehicle is designed to perform a number of tactical missions in different armed conflict situations. Its primary role is to transport infantrymen to the battlefield, while providing direct fire support.

Unveiled in 2016, the new variant has improved protection features over the Lazar 2 armoured vehicle. It took part in the International Defence Exhibition and Conference (IDEX) held in Abu Dhabi, UAE, in February.

Yugoimport SDPR delivered 20 Lazar 3 vehicles, configured for special forces missions, to the Ministry of Interior of the Republic of Serbia in June 2016.

An additional 12 vehicles are on order for use by the Serbian army and police forces.

The maximum weight of the vehicle is 28t, while the combat weight varies between 22t and 26t depending upon the mission requirements.

Additionally, the vehicle accommodates up to nine soldiers in the troop compartment, which has five bullet-resistant glass windows with firing ports below them on either side. A hydraulically operated ramp with two bulletproof glass windows is fitted at the rear to provide entry / exit for the vehicle occupants.

The vehicle’s interior incorporates an Intercom system, air conditioning system and an automatic fire-fighting system. The vehicle also features a winch with a pulling capacity of 10t.

The Lazar 3 vehicle has a remote control weapon station (RCWS), which can be armed with one 30mm M86 automatic cannon or one 7.62mm M86 co-axial machine gun or one anti-tank guided missile (ATGM) for protection against light armoured vehicles, military installations and low-flying air targets.

Six smoke grenade launchers are mounted on the roof of the vehicle at the rear to provide additional firepower to infantry.

The vehicle offers protection against land mines and improvised explosive devices under any wheel or track up to STANAG 4569 level 3a/3b.

The crew compartment can be optionally provided with spall liner to prevent small-calibre projectiles and fragments.

The Lazar 3 infantry fighting vehicle is driven by an 11l Cummins ISM 500 engine, which develops 373kW of output power and 2,100nm of torque at 1,200rpm-1,600rpm. Located in the forward portion of the vehicle, the engine offers a top speed of 110km/h.

“Based on wheeled chassis, the vehicle is designed to perform a number of tactical missions in different armed conflict situations.”

The vehicle is capable of climbing grades of 60% and side slopes of 30%. It can traverse through 55cm of vertical obstacles and negotiate 2m of trenches. It has a turning circle diameter of 11.5m and a fording depth of 1.6m. Its approach and departure angles are 45° and 38° respectively.

Tyron won a contract from Yugoimport SDPR in June 2016 for the supply of multi-part rubber runflats for 12 Lazar armoured vehicles.