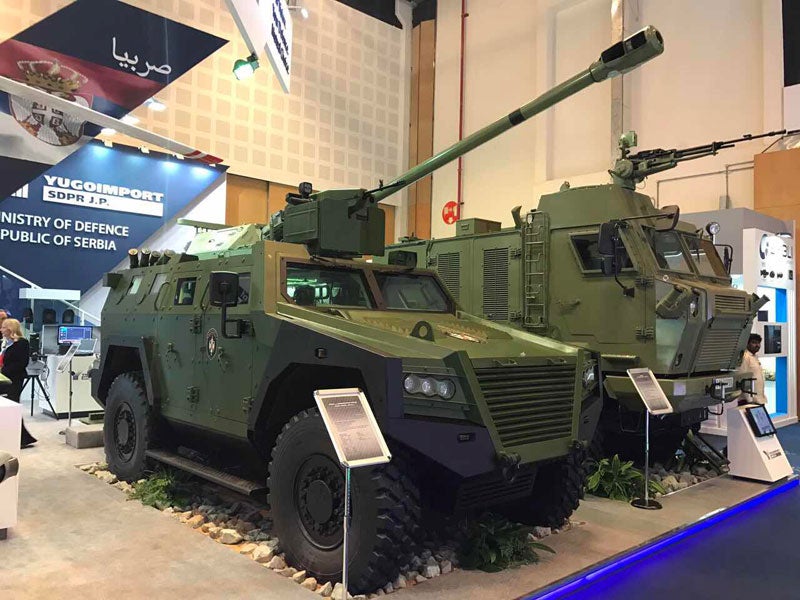 The vehicle can be configured to perform a variety of military missions, including artillery reconnaissance, patrol, border and territory control, surveillance, command, anti-tank, anti-terrorism, and transportation of military personnel and special forces units.

Featuring a monocoque steel hull structure, the Milosh multi-purpose armoured vehicle is based on a four-wheel drive chassis. It has a ground clearance of 0.42m and a gross vehicle weight of 14t.

The vehicle is manned by three crew members, including driver, commander and gunner, and can accommodate up to five dismounted troops. Two single doors are provided on either side of the hull to allow the crew and troops embark or disembark the vehicle.

A hydraulic ramp is fitted at the rear to facilitate quick entry / exit for the personnel in the troop compartment.

The troop section is equipped with five bullet-proof window inserts to provide situational awareness for the infantrymen. A circular firing port is placed below each window, allowing the troops to fire personal weapons during counter-ambush operations.

In standard configuration, the vehicle is installed with an air-conditioning system to ensure crew comfort under varying climatic conditions.

The Milosh armoured vehicle can carry a variety of weapons required to perform different tactical missions.

Up to six 82mm smoke grenade launchers are placed atop the troop compartment at the rear, to provide self-defence for the occupants.

The armament options include manually controlled weapon station equipped with machine guns, AD rocket systems and long-range anti-tank guided missile systems that are capable of firing at ranges between 5km and 8.5km.

The armoured vehicle offers high level of protection up to STANAG 4569 Level 2a and 2b against mine and improvised explosive device (IED) blasts. It also incorporates NBC (nuclear, biological and chemical) protection system to provide defence against nuclear, biological or chemical substances.

The turret carries a sighting device, consisting of opto-electronic thermal imaging cameras and radar systems, to provide target detection and tracking both during day and night.

“The vehicle can be configured to perform a variety of military missions, including artillery reconnaissance, patrol, border and territory control, surveillance, command, anti-tank, anti-terrorism, and transportation of military personnel and special forces units.”

The propulsion system is located in the front portion of the vehicle and offers a maximum speed of 110km/h. It incorporates a 6.9l, six-cylinder Cummins ISB 300 diesel engine connected to an Allison 3500SP six-speed automatic transmission system.

The engine develops an output power of 224kW and a peak torque of 841nm at a rate of 2,600rpm. A rigid axle independent suspension system is installed to maximise the mobility and off-road performance.

The Milosh multi-purpose armoured vehicle also features 20in wheels attached with aluminium rims and run flat tyres, which allow the vehicle to travel up to 50km in emergency conditions.

Air pressure in each tyre is controlled by a central tyre inflation system to further increase the vehicle’s performance on rugged surfaces.