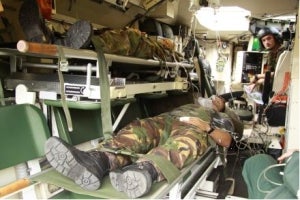 Partnering, support, integration and supply are key to the Marshall Land Systems presentation at the Land Warfare Conference being held at the Melbourne Convention and Exhibition Centre from October 29th to November 2nd, 2012.

On the company’s stand in Area 11, Marshall Land Systems has a strong team to discuss its offerings to the market. First of these is its work in Expeditionary Camp Infrastructure which includes kitchens, latrines and other facilities necessary for a deployed camp to run efficiently.

The company has developed and proven its capabilities in providing Deployable Healthcare solutions from the initial point of injury through the care chain back to a Role 3 hospital and eventual evacuation from theatre. These solutions include deployable CT Scanners, stretcher systems and fully fitted hospitals. Among the company’s customers for medical systems are the UK, Norway and France.

The experience the company has developed in providing deployable forensic laboratories has resulted in defence and security forces having a forward, re-deployable capability to exploit evidence close to the area where it was found. Rather than having to send evidence back many hundreds of kilometres for analysis, it can be investigated close to the scene of the incident and defence forces are able to act on the data much quicker.

For many years Marshall Land Systems has been developing deployable modules to be used for a wide range of roles including C4 centres, ground control stations, workshops or specialist facilities such as battery charging units.

Underlying these capabilities are the company’s proven skills in requirements capture, through life support, partnering and integration.

"Marshall Land Systems has developed a strong range of skills coupled with a very strong focus on project management to ensure our customers receive real value for money. Developing our business in Australia is a key part of the business plan and attending the Land Warfare Conference with key members of our team demonstrates our commitment. I am looking forward to continuing conversations and establishing new contacts," said Peter Callaghan, Chief Executive of Marshall Land Systems.

Marshall Land Systems has recently established a Business Development team and appointed Iain Watt as Head of Business Development in Australia. The team is co-located with Tectonica www.tectonica.net in Melbourne. Marshall Land Systems is now launching a major supply network consultation aimed at provision of Australian based COTS solutions to Defence and other customers for a number of projects coming to fruition in Australia and potentially worldwide.