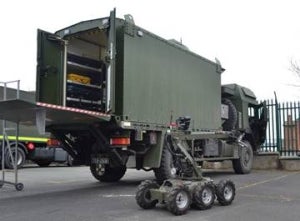 These new vehicles will augment those already in service supporting Ireland’s UN missions operating in the Middle East, where the Defence Forces’ EOD teams deploy in their armoured vehicles as part of route clearance operations or to handle unexploded ordnance found by the UN forces operating in the area.

"The units already in service have provided protection that enables us to deploy in an environment where effective EOD and route clearance operations would be extremely difficult without the support of the Marshall armoured shelters and MAN HX 60 combination," commented a spokesperson for the Irish Defence Forces.

The Marshall designed shelters have been laid out to maximise storage for all the equipment needed by the team including the EOD officer’s bomb suit, X-ray system and forensic sample collection equipment and to give the team space to work in safety.

Housed in the shelter is the team’s robot, which can be operated remotely from the shelter’s inside.

The vehicles are equipped with an integral tail lift for deployment and recovery of the EOD robot and have a stand-alone generator so the vehicle can operate autonomously.