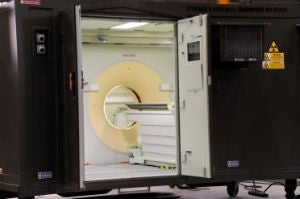 Queen’s Award winning CT Scanner, vehicle integration, logistic support and vehicle survivability form the core of Marshall Land Systems’ display on stands 31 and 35 on the steering pad at DVD, being held at Millbrook Bedfordshire on 19-20 June 2013.

CT imagery is now an essential capability need within military medicine. The Marshall CT Scanner has been selected and is in-service with three defence forces providing lifesaving diagnostic imagery to assist military surgeons in treating casualties – especially in cases of major trauma.

CT Scanning is a diagnostic capability used routinely and frequently in conventional hospitals. The Marshall’s containerised CT Scanner uniquely allows this capability to be brought forward in the battlespace within deployable field hospitals.

The Philips multi-slice CT has been integrated into a military shelter providing the tightly controlled environment needed for safe and effective operation of the scanner. The shelter and patented mounting system protects the CT scanner from shock and vibration in transit and the environmental control keeps the internal temperature and humidity within strict limits allowing deployment in any demanding location from arctic cold to hot desert conditions.

The shelter design complies with international ISO standards so is compatible with the standard military logistical systems simplifying both strategic and tactical movement. The system can be moved as any other 20ft ISO container by road, rail, sea and air. The system is simple to set up with first scans available within four hours of arrival in location.

The company’s skills in vehicle integration are being demonstrated by Team SOCRATES in the Future Deployable Geospatial (FDG) Intelligence System. Marshall Land Systems is involved, along with a number of other UK companies, as part of Team SOCRATES, in the integration of systems into a box body fitted to the back of a Mowag Duro II vehicle. FDG will deliver a two-man, deployable, self-contained working environment. The contract is due for delivery later this year.

Following the signing of a collaboration agreement, the company, together with G3 Systems has formed a new force in logistic support – Team M3, which will be discussing its offering in infrastructure support for the UK MoD. The team offers a low-risk solution using the skills of both companies to deliver the necessary expertise in infrastructure and service solutions through a single point of contact. The team has been structured to add real value and to have the capacity to grow as the need arises.

Vehicle Survivability skills are demonstrated by Lorica, a joint venture between Marshall and Plasan of Israel. On display will be a piece of armour used in recent trials as part of the test process following the announcement in November last year that the company had been selected as the preferred turret armour supplier for the demonstration phase of the UK’s MoD Warrior Capability Sustainment Programme (WCSP).