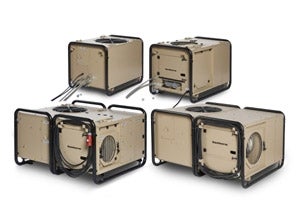 As part of its efforts to reduce energy consumption, Dantherm has started to replace old energy-consuming fans with energy-saving models, which are compliant with the energy-related product (ErP) directive.

ErP defines the minimum required efficiency of products or components that use energy. For Dantherm products, it influences fan motors with a power consumption above 125W.

The target for this directive is to reduce the overall energy consumption in the supply chain. In future, the CE marking on Dantherm products will cover both product safety and energy-efficiency requirements.

From 8 to 11 September 2020, Dantherm will be showcasing its range of field-deployable heating...

Are you looking for portable air conditioning for clean room solutions in your field camp...

In November 2019, renowned DSEI London will be hosting a large defence and security exhibition...