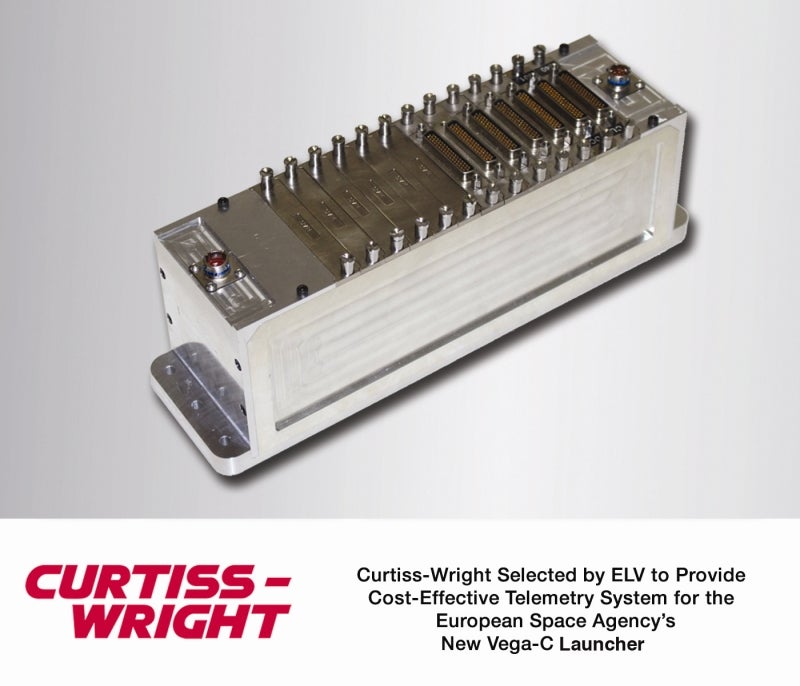 Curtiss-Wright’s Defense Solutions division recently announced that it has been selected by Italy’s ELV SpA (Avio Group), the prime contractor on the Vega-C Launcher System and GPM Development and Qualification Programme for the European Space Agency (ESA), to provide a COTS-based telemetry data system for the new launcher.

The mid-sized Vega-C is designed to deliver government, commercial, and science payloads weighing three tonnes or less, such as small satellite constellations to low-earth orbit. As this market is especially cost sensitive, ESA’s goal is for the Vega-C launcher to serve as a next-generation launch vehicle that is able to support the same or greater mission objectives as the original Vega launcher, but at a reduced cost. Curtiss-Wright’s cost-effective COTS electronics systems approach was selected to support this challenging performance / cost target.

This agreement represents the first use of Curtiss-Wright’s groundbreaking radiation tolerant Smart Backplane technology on a European launch vehicle. Under the contract, Curtiss-Wright will provide ELV with a full telemetry system, including data acquisition, data handling, and RF transmission. The Vega-C development contract runs from January until its first launch in June 2019, with a value estimated at $5m. The value of the subsequent production phase is estimated at more than $10m over the lifetime of the programme.

"We are very excited about being selected by ELV to provide our cost-effective Space COTS telemetry system for use on the Vega-C, especially as this is our first avionics design win on a European launcher," said Lynn Bamford, Senior Vice President and General Manager, Defense Solutions division.

"Our unique Smart Backplane technology enables radiation tolerant electronics to be used in many applications across many market sectors, allowing lower cost COTS modules to be reliably used in harsh space environments."

The Vega-C rocket will be launched from Europe’s Spaceport in Kourou, French Guiana. ESA’s requirement for Vega-C flights include a minimum of three launches per year, with expected demand for at least four per year. Curtiss-Wright will develop and manufacture the telemetry system for Vega-C at its facilities in Dublin, Ireland.

Ireland’s industrial and research participation in the ESA programmes is coordinated by Enterprise Ireland in collaboration with the Department of Jobs, Enterprise and Innovation.

"This is a significant achievement by an Irish based operation working at the cutting edge of space technologies," said John Halligan T.D. Ireland’s Minister of State for Skills, Research and Innovation.

"This contract award demonstrates how Irish operations, such as Curtiss-Wright’s business unit in Dublin, are developing technologies to the highest levels of performance and reliability for the European space programme.

"These technologies have the potential to lead to increased sales in the global market and the creation of high value jobs in Irish operations in line with the government’s strategy for Ireland’s membership in ESA."