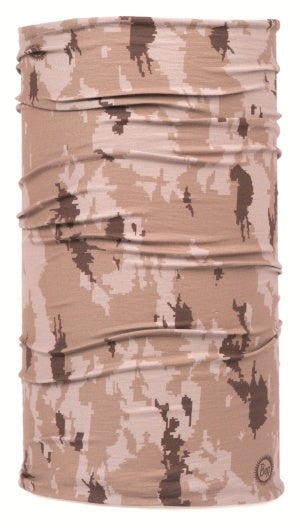 In BUFF we work to expand our product range constantly. Our R&D department has two clear objectives when developing products for the professional line: they have to protect and be functional. These concepts have been, once again, the parameters taken into account in the development of new products.

Considering the progress done in the work wear of the armies and more specifically in the field of camouflage, Original BUFF decided to update its offer for armies. Digital camouflage has been adopted by several armies and for that reason two new DRY COOL Buff digital camouflages have been included.

Digital camouflage is different from other patterns because it is composed of blocky structures of small size. The absence of big defined shapes generates a blurring effect that improves mimicry with the environment.

Depending on the geographical areas where armies develop their operations, landscapes and surrounding colors can be very different and this calls for different camouflages. The most common environments are arid or tropical. Bearing this in mind, in-house digital patterns have been developed according to the standards of the most advanced camouflage clothing.

For arid zones, the Dry Cool Buff Arid has been designed combining shades of brown, beige and ocher. This model is inspired by the new equipment of the Spanish army and the MARPAT uniform currently used by the US in desert areas.

On the other hand, the Dry Cool Buff Tropical has been prepared thinking specifically on forestry and green areas. Thus, it is composed of different shades of green and brown. The design of this tubular resembles the uniforms being used by several armies in South East Asia.

From Buff we are convinced that this new products will be a success and we will be happy to provide you with some samples in case you would like to have a closer look at them.