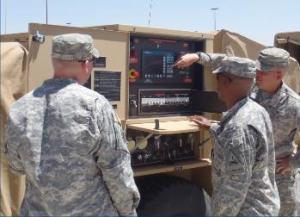 DHS developed its Intelligent Power Technology® (IPT) trailer to enhance energy efficiency on the battlefield. Since its inception, IPT has been continually improved to reflect the needs of the modern warfighter. Now, the company has released version three of its IPT systems, which is equipped with new features.

The most notable feature of version three is a DHS customised firmware controller. With the new system, users have the capability
to reset the software to original equipment manufacturer (OEM) settings. This benefit provides users with a quick way to fix configuration issues should they occur.

Another feature is the light-emitting diode (LED) indicator light, which will alert the user of the system’s load-shed status and will appear on the Genset Power Distribution Panel. This feature is beneficial for users to respond to load shed activity.

Richard Chou, vice president of engineering at DHS Systems, highlighted compatibility of the version three. "All IPTs are backward compatible," he said. "In other words, our customers that have an Analog system can upgrade to our digital system, as DHS offers conversion kits for both gensets and ECUs. Once the conversion is done, all units can operate in a digital programmable power grid."

In terms of IPT’s energy-saving capability, Richard stated: "From the army’s NIE 13.1 Ft. Bliss operation, they reported that fuel consumption decreased from 300 gallons a day to 109 gallons a day using our IPTs. That is a 64% fuel savings."