Don’t Let Your Soldiers Be Seen. They Might Be Killed! 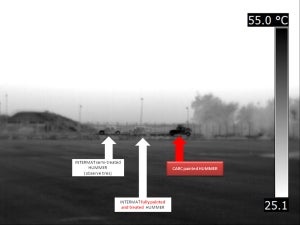 What do all current and presumably nearby future Theaters of Operation have in common?

Insurgents, guerillas, opposing forces, state and non-state actors are able to challenge peacekeeping and stability forces even at night, as thermal imagers and thermal sensors are widespread. Either by breaking into local Defense Forces’ equipment facilities and warehouses or even procure by internet, the Fourth Generation Warfare includes threats coming by thermal imagers which are operated by the "wrong side".

And "don’t be seen" nowdays means Intermat coatings and products for vehicles, weapon systems, even buildings, airfields and oil tanks and pipes, critical infrastructure and more: anti-thermal sniper or ghillie suits for the personnel.

Real anti-thermal (i.e. minimize even down to zero your soldiers’ and assets’ thermal signature) capability, without adding more weight and workload in the battlefield by using heavy and difficult to use camouflage nets and of course without affecting at all your weapon system’s mobility and operational action.

Leave your area of deployment without worrying about camouflage nets packaging, approach as close as you can enemy lines, plan under your own rules and execute most dare plans. Gun’s ranges aim deeper as you are able to approach deeper and "shoot and scoot" is smoother than ever. Coating is always there, always protecting your soldiers and systems from adversary’s thermal imagers.

No time for stealth coating your systems and vehicles? No time for "paint operations"?

Intermat is providing stealth anti-thermal technology in the form of Self-Adhesive Camouflage system. Easy to use as the soldier in the field can "stick and go" day and night. Full anti-thermal capability, visual camouflage performance and a product that soldier is able to change at will, during operations. Deployment from jungle to urban terrain within less than a couple of hours.

Deploying for a couple of months and considering to paint or re-paint your peacekeeping forces’ vehicles? Waste of resources. And waste of funds.

Just have a rough look at the area of operations terrain and use the suitable Intermat’s self-adhesive anti-thermal decals and materials.

So, the next time you will be in the battlefield just ask yourself: what would be your preferable vehicle to operate with?