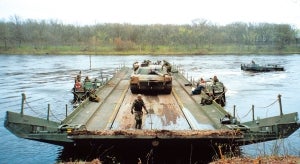 As part of the drill, the PIRANHA 5 was driven into the cargo compartment and completely tied-down according the airlift procedures.

The crew was able to easily load the vehicle in the cargo compartment of the aircraft, which can accommodate one PIRANHA 5 and 29 fully equipped soldiers.

The objective was to validate the boarding of a PIRANHA 5 in the cargo compartment without any special preparation as part of a broader A400M evaluation process, demonstrating the transport capability of combat vehicles.

The demonstration was conducted at ADS site in San Pablo (Seville, Spain), which is the final assembly plant for the A400M.

Eight countries have placed orders for the A400M aircraft, including Belgium, France, Germany, Luxembourg, Spain, Turkey, the UK and Malaysia.

Two NATO countries, Denmark and Spain, have selected the PIRANHA 5 as their future 8×8 vehicle platform. The Danish Ministry of Defence has signed a contract for 309 PIRANHA 5. The Spanish Ministry of Defence selected PIRANHA 5 as platform for the integration of Spanish technologies and subsystems under an R&D contract for the future Wheeled Combat Vehicle (VCR in Spanish) project.

The PIRANHA 5 is one of the most advanced and capable 8×8 wheeled armored wheeled vehicles and the top end of the PIRANHA vehicle family. In addition to its high level of protection, the PIRANHA 5 has a flexible and spacious crew compartment and tremendous payload.

The inherent growth potential ensures the ability for future upgrades and technology insertion over the entire lifetime. In terms of mobility and manoeuverability, the PIRANHA 5 with its efficient all-wheel drive, hydropneumatic suspension and fourth axle steering sets the top standard in this vehicle class.

The PIRANHA is the most successful Western wheeled armoured vehicle family, with more than 11,500 PIRANHAs in service worldwide.