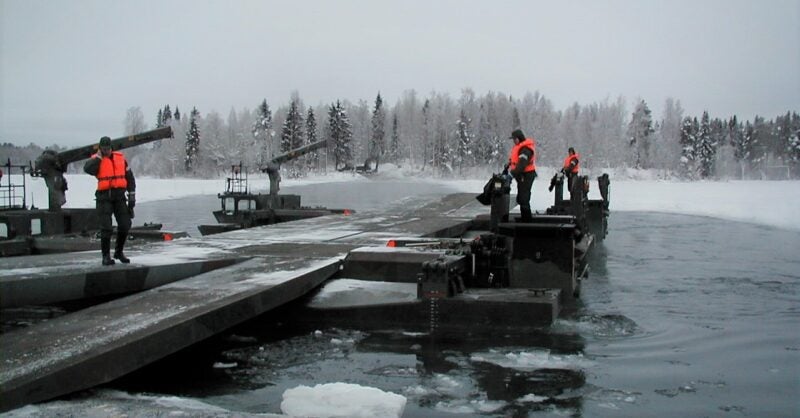 General Dynamics European Land Systems (GDELS) announced today that it has contracted with the Swedish Defence Materiel Administration (FMV) to deliver M3 amphibious bridge and ferry systems for the Swedish Army. In addition, GDELS will provide additional bays of the Improved Ribbon Bridge (IRB) system, which is already in service in Sweden.

“Sweden will receive the newest version of the M3, which is specifically designed for operations under Arctic conditions and only requires a crew of two soldiers due to a higher degree of automation”, said Dr. Christian Kauth, Managing Director of GDELS Bridge Systems. The M3 is fully interoperable with the IRB through a coupling device that enables both bridge and ferry functions.

The M3 and IRB are in service worldwide supporting many operations including peacekeeping and disaster relief. Sweden joins a growing M3 user community comprising multiple international customers in Europe and Asia. Both the M3 amphibious bridge and ferry system as well as the IRB floating bridge can carry all NATO vehicles and can build a 100m (330 ft.) floating bridge within 10 minutes for the M3 and within 30 minutes for the IRB.

“This contract award emphasizes the significance of interoperability of two different floating bridges of the Swedish armed forces, but also towards and among its military allies,” said Dr. Thomas Kauffmann, Vice President of International Business and Services for GDELS. “This unique interoperability feature is solely offered by GDELS – Bridge Systems and is an important requisite of military mobility for national, allied and multinational forces such as NATO.”