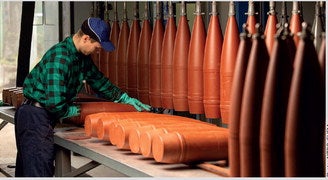 In addition to the production of explosives, ammunition filling services represents a core element of NITRO-CHEM’s activity.

NITRO-CHEM has more than 70 years of experience in the production of explosives and ammunition. It has reliable, efficient and continually modernised production facilities, which are based on the best technological solutions. The company also includes an R& D department.

As a result, the products and services provided are of the highest quality, corresponding to many international standards, including NATO standards. Based in Poland, NITRO-CHEM has a quality management system compliant with ISO 9001 and AQAP 2110 standards and exports to many countries, including the USA, Canada, Great Britain, France, Spain, Italy, Germany, Sweden and South Africa.

NITRO-CHEM’s development reached an important milestone in 2019 with the introduction of a filling line for Mk 82 aerial bombs – included in the payload of F16 fighters, for example. This type of armament is found in the inventories of almost all armed forces belonging to NATO. NITRO-CHEM is looking at export possibilities to other, non-aligned markets as well.

Over 70-year-long experience in production of explosives and ammunition gives us the wide knowledge of their production technology and about the needs of the defence...