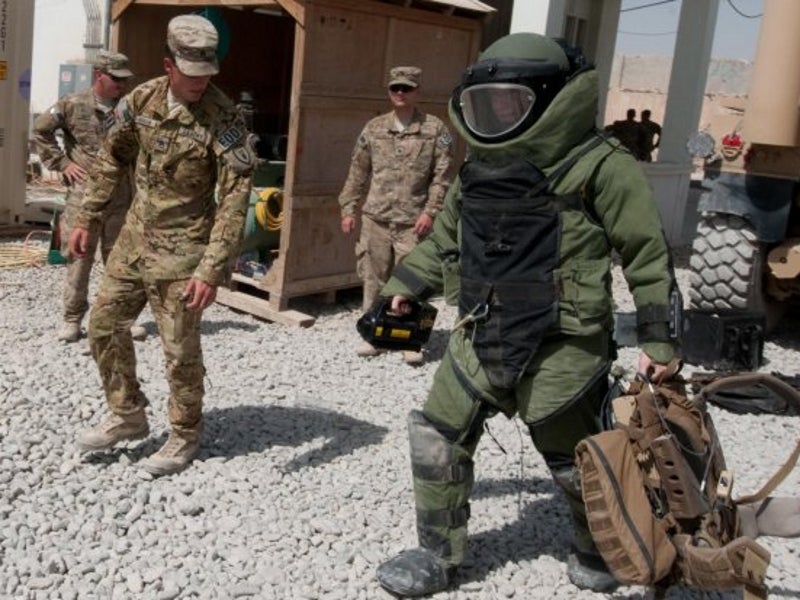 The robot is intended for use by the soldiers in EOD missions, including detection, identification, recovery and disposal of explosive ordnance and improvised explosive devices (IEDs).

A prototype of the T7 EOD robot solution was demonstrated during the Association of the United States Army (AUSA) Conference held in Washington, DC, US, in October.

Features of the bomb disposal robot

The T7 EOD robot system features modular design, which enables integration of a variety of equipment used for mounting standard-issue disruptors and weaponry.

It is 120cm-long, 70.1cm-wide and 116.1cm-high, and weighs 342kg when fitted with a manipulator. It uses four Ethernet communication ports 24 VDC connectors.

The robot system has a 120X zoom pan, tilt, and zoom (PTZ) camera mast, which is used to capture imagery and video of suspect objects.

It is fitted with two driving cameras for providing increased situational awareness at the front and rear. Four fender-mounted cameras located at the corners allow the operator to manoeuvre the robot in close quarters.

The bomb disposal robot is equipped with a multi-axis robotic arm manipulator with an integrated haptic sensing gripper to lift explosive ordnance and objects weighing more than 130kg near the robot track. The manipulator’s vertical and horizontal reaches are 3m and 2.2m, respectively. It can lift up to 27kg of loads at full extension.

The gripper has a camera with visible and infrared (IR) lighting to provide clear view of the objects in different lighting modes. In addition to the gripper, the manipulator can be attached with disruptor mount.

Operation and control of the T7 robot

The T7 EOD robot’s manipulator is controlled using a haptic controller from a distance of up to 1km. The controller incorporates daylight visible display, two-way audio communications system, and 4-DOF (degree of freedom) haptic feedback function.

“The robot is intended for use by the soldiers in EOD missions, including detection, identification, recovery and disposal of explosive ordnance and improvised explosive devices (IEDs).”

The haptic controller system enables the operator to create preset sequences of tasks for the robot manipulator. It can perform intuitive spatial control with pistol grip over the actuated object. It can also operate the manipulator in motion / rewind modes.

It is powered by a single BB-2590 Lithium-ion (Li-ion) battery and offers a runtime of three hours. It can be carried in a case weighing 23kg.

Power and performance of the T7 bomb disposal robot

Driven by 12 hot-swappable BB-2590 rechargeable Li-ion batteries, the T7 EOD robot can travel at a maximum speed of 3.7mph.

Installed with in-vehicle battery charger, the robot is capable of operating for more than four hours.

The robot has the ability to climb stairs and slopes of 40° and to traverse lateral slopes of 30°, whereas the turning radius of the robot is 1.39m.