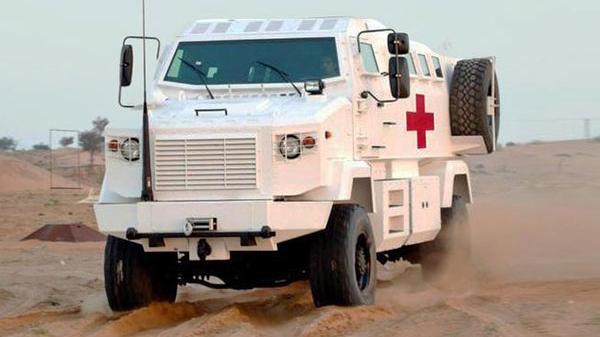 Shrek Explosive Ordnance Disposal (EOD) vehicle is a EOD variant of the Shrek Mine-Resistant Ambush Protected (MRAP) armoured vehicle. It was designed and developed by Streit Group, was showcased at the International Defence Exhibition and Conference (IDEX) held in UAE in February 2015.

Shrek EOD is designed for the safe transportation of EOD teams in battlefields and other hostile environments. It can defuse bombs and explosives such as roadside improvised explosive devices (IEDs). It features a V-shaped, armoured hull made of certified ballistic steel and the hull can resist external ballistic threats from any angle.

The vehicle is installed with an external articulated arm operated console, PVC arm cover, and a crane manipulator. The bomb arm has a working reach of 6m and lift capability of approximately 200kg. It can also be attached with digging fork, a surface roller, a crust breaker, and a grab hand to lift suspicious objects.

A remote-controlled closed circuit camera fitted on the arm provides the operator with a view of its end area. The arm is also fitted with a double barrel water disruptor with lateral motorised movement and a focus camera.

The vehicle includes a tool box with a hydraulic jack and all necessary items for routine repair and maintenance as well as a wheel brace and other tools for replacing a punctured tire in the field.

"It can withstand the explosion of one TM-57 landmine or 7kg TNT directly under hull, and a blast force of two TM-57 landmines or 14kg TNT under any wheel."

The Shrek mine interrogation vehicle offers STANAG 4569 Level 2 ballistic protection. It can withstand the explosion of one TM-57 landmine or 7kg TNT directly under hull, and a blast force of two TM-57 landmines or 14kg TNT under any wheel.

The Shrek EOD vehicle is powered by a YAMZ-238D engine, which develops 243kW (330hp) of power. The EURO-0 emission standard four-stoke diesel engine is coupled with nine-speed manual transmission system and a 9JS150TA-B gearbox.

The vehicle’s gear box and clutch were supplied respectively by China-based Fast Gear Company and German company, Zehnrad Fabrik. The vehicle has a maximum range of 600km.

The suspension and brake systems of the vehicle are upgraded to support the full armour weight. The wheels are fitted with 445.65 R22.5 XLZ Michelin tyres integrating built-in run-flats and bead lock systems.