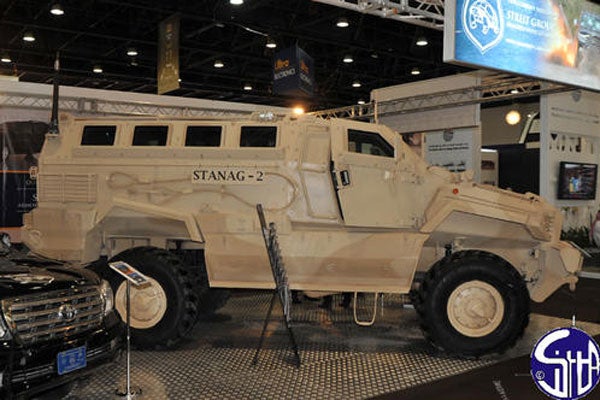 The MRAP vehicle was demonstrated at the DSEi 2011 defence and security equipment exhibition. Typhoon was also exhibited at the LAAD Defence & Security 2013 exhibition in Brazil, IDEX 2013 in Abu Dhabi, and IAV 2013 in Farnborough, UK.

Streit Group unveiled the Typhoon 6×6 APC variant at the IDEX 2013 defence exhibition. The 6×6 variant offers blast and ballistic protection up to STANAG Level 4.

With UK Forces active in Afghanistan and Iraq a new vehicle was ordered by the UK MoD (Ministry of Defence) to provide protection to troops on patrol from mines and roadside bombs.

The Typhoon MRAP APC features a V-shaped wall monocoque armoured hull design. It is based on the chassis of Kamaz 4×4 heavy-duty vehicle, and can operate in urban, mountainous and difficult rural terrains.

The vehicle is 6.65m long, 2.43m wide and 2.37m high, and has a gross vehicle mass of up to 16,000kg. It is equipped with air conditioning system to minimise the crew fatigue. It is also fitted with radio communication system, global positioning system (GPS), and video surveillance equipment.

The vehicle can accommodate a driver, a commander and up to eight troops. The front section is fitted with two doors and five-point harness seats for driver and commander. The rear section incorporates eight folding seats with safety belts for the troops. The interior features full padded cell lining to offer protection for personnel from blast or accident.

Four small bullet-proof windows are fitted on each side of the vehicle, providing increased visibility for the troops. A quick speed hydraulic ramp is fitted at the rear to embark and disembark the personnel. The door can be opened or closed in seven seconds.

Four hatches are provided on the top of the hull.

"The engine compartment is completely armoured for protection against damages."

The Typhoon MRAP APC is powered by Cummins four stroke, turbo charged 8.8l inter-cooled diesel engine consisting of six cylinders. The engine generates a power of 400hp and develops a torque of 858fp at a rate of 1,300rpm. The armoured carrier has a fuel capacity of 158.5 gallons.

The engine compartment is completely armoured for protection against damages. It also consists of a gearbox provided by Allison Automatic. It has multiple gear options including four stages forward and one reverse, neutral and parking. The suspension system consists of semi-elliptical leaf springs and sway bars.

The MRAP armoured vehicle is fitted with power-assisted steering and 0.39m drum brakes. It.has a wheelbase of 3.77m, ground clearance of 0.59m and a turning radius of 9.1m. The approach and departure angles of the vehicle are 42° respectively. The vehicle can attain a speed of approximately 100km/h and can operate up to a range more than 1,000km without refuelling.