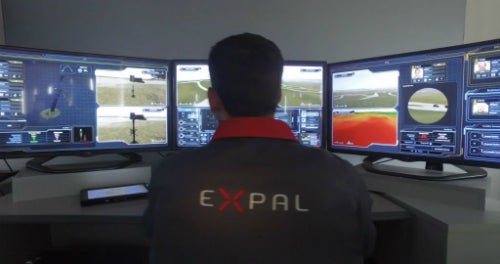 EXPAL has introduced its new simulator SIMOX, that can bed used to train and educate a section of mortars and each of its members.

EXPAL has applied the advantages of the modern simulation technology in order to create a simulator that replicates faithfully every aspect that a section of mortars and the various members that compose it, forward observer, charger and handle and head of the section must know and train before carrying out their missions in real scenarios.

The instructor will be able to prepare and evaluate his team in a highly realistic environment that can reproduce any scenario or situation previously predesigned and other aspects such as hostile weather or night missions, allowing them to be prepared to react to the various missions that they have to face in their actual operations, keeping them highly prepared to carry them out.

SIMOX will be displayed in EXPAL booth in this edition of the International Fair of Defense and Security EUROSATORY, held in Paris from 13 to 17 June.

SIMOX completes the wide range of solutions for indirect fire support of EXPAL that is leader in the sector and also it will be a part of other systems such as EIMOS, the 81mm mortar embarked on a light vehicle 4×4, also present in this edition of EUROSATORY along with its information system, TECHFIRE, both already in service.

Other proposals highlighted by the company, will be its artillery ammunition high performance with a proven record of up to 40km into the barrel of 155mm range and up to 20km in the 105, its extensive and effective supply in materials engineering and C-IED services or its ability in demilitarisation services, area of activity in which EXPAL is a global leader for their skills and proprietary technologies.