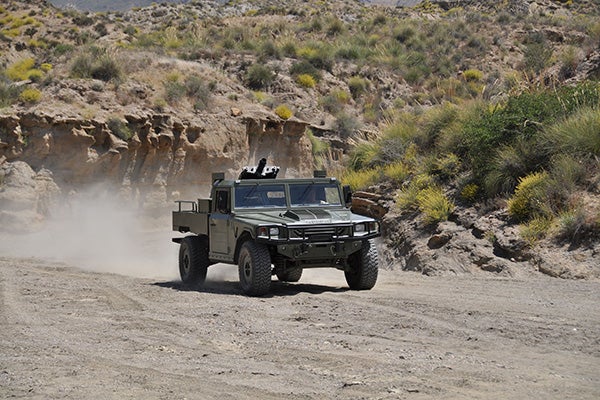 EIMOS is a truck-mounted integrated mortar system designed and manufactured by Spanish defence company EXPAL Systems. It is developed to support current and future requirements of land forces. The weapon system provides high firepower capabilities and reliability during combat missions, and also offers enhanced protection for the crew.

EXPAL secured a $27.43m contract from the Italian Ministry of Defence in November 2011 for the supply of 81mm EIMOS long-range mortar systems through 2014.

EXPAL conducted live-firing of the 60mm EIMOS mortar system in different positions on the ground at the Spanish Army’s San Gregorio National Training Center in Zaragoza in October 2012. The mortar system was also demonstrated at the Chilean defence exhibition FIDAE held in March 2014.

The EIMOS mortar system can be mounted on a 4×4 high mobility lightweight vehicle. It has increased efficiency and offers superior responsiveness to fire support orders. It can also be deployed on the ground, can operate in all weather conditions, and can be transported by sea, land and air.

The ASCOD (Austrian-Spanish Cooperative Development) family of fighting vehicles is marketed by ASCOD AIE with headquarters based in Madrid, Spain.

The system has a maximum height of 2.05m / 1.75m and a base diameter of 780mm. It weighs up to 500kg, depending on the configuration. It can be operated by a crew of minimum two and can be reconfigured based on the customer requirements.

The weapon system can perform first firing in less than 10 seconds. It can locate targets in 180 grades within 20 seconds. The EIMOS requires ten seconds to designate and destroy targets from positioning.

The precision on mortar position is less than 2m and can be calculated automatically to decrease the use of munitions and collateral damages. The system makes automatic position corrections due to displacements and changes on the axle of the weapon. The sensors subsystem allows the system to operate immediately after position correction and loading.

The mortar system can be rotated through 360° in traverse, 4° in elevation and 4° in deflection angles for precision aiming.

The EIMOS mortar system is equipped with an automatic aiming and shooting control system to provide fire direction procedures and to improve precision.

"A command and control system is also fitted to provide integrated performance to the mortar system."

An elastic device is installed to minimise transmission of efforts and vibrations caused due to the vehicle’s long crossing design and optimised brake. A command and control (C2) system is also fitted to provide integrated performance to the mortar system.

The weapon system incorporates electric motors with a power output of up to 2kW and duty cycle of less than 10%. It is also fitted with a hydraulic recoil system, with maximum recoil of 30mm, to increase the accuracy and firepower. The recoil absorption system minimises over 90% the forces transmitted from the mortar to the vehicle.

The TECHFIRE system allows the operator to monitor fire control process data using its user-friendly screen. It is equipped with a GIS visual interface to help in the decision making.