Penetrates up to 420mm of RHA

Penetrates up to 150mm of RHA 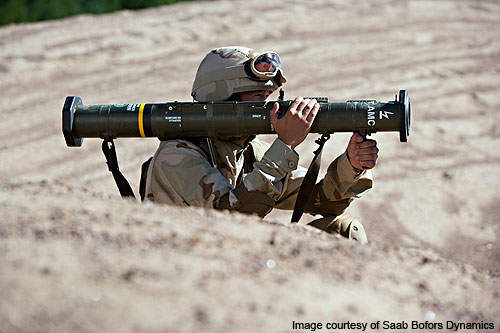 The AT4 is an 84-mm unguided, anti-armour weapon. 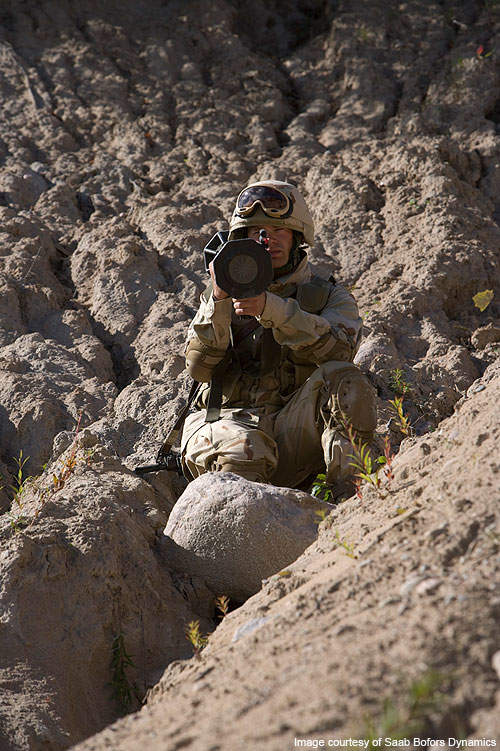 Saab Bofors has used many design features of Carl Gustav while developing AT4. 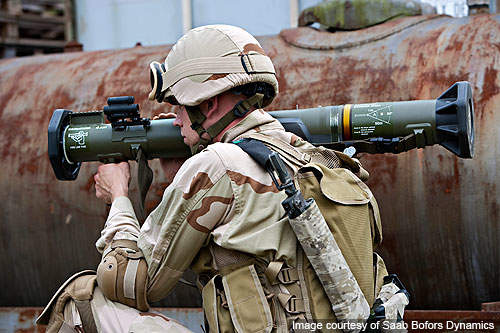 A target is aimed with AT4 through range-adjustable plastic sights. 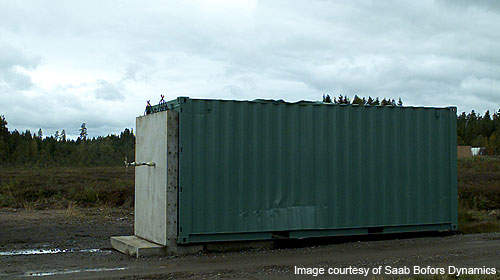 The weapon has an optical night sight. 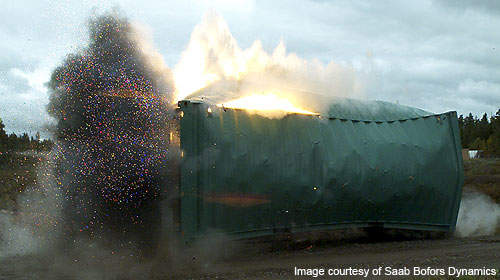 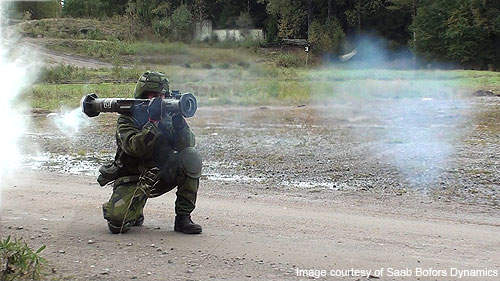 The AT4 is an 84mm unguided anti-armour weapon manufactured by Saab Bofors Dynamics.  It is effective in assaulting tanks and combat vehicles, landing craft, helicopter, aircraft and armoured vehicles.

The AT4 is a man-portable weapon used for the protection of vital assets, fixed defence installations and key supply points.Argentina, Bosnia and Herzegovina, Brazil, Chile, Colombia, Denmark, Estonia, France, Greece, Iraq, Ireland, Latvia, Lebanon, Lithuania, Malaysia, The Netherlands, Taiwan, Sweden, the UK, the US and Venezuela are among the countries that have deployed the weapon in their artilleries.

The AT4 anti-armour weapon was developed from the 74mm Pansarskott M68 weapon that the Swedish Army adopted in the 1960s.

The AT4 was designed by Försvarets Fabriksverk (FFV) which had tested  more than 100 weapons by early 1982 with the help of the Swedish Army.

“The AT4 anti-armour weapon was developed from the 74mm Pansarskott M68.”

In 1982, the AT4 was introduced into the US Army before the weapon was adopted by Sweden. The US Army tested six different weapons in 1983 and found that the FFV AT4 met all the requirements needed to replace its M72 LAW weapon.

The US Army adopted AT4 as the lightweight multipurpose weapon M136 after altering the weapon’s launch tube bumpers, sights and slings. The Swedish Army also adopted the Americanised version.

AT4 anti-tank missile orders and deliveries

In November 2010, Saab received a €15m order from the French Defence Forces for the light anti-tank weapon AT4 (confined space), a variant of AT4. In April 2011, Saab received a $17m (Skr104m) order from an unknown customer to deliver the AT4-CS RS version during 2012.

Saab secured a contract worth $38.02m from the French defence procurement agency DGA (Direction Générale de l’Armement) for the supply of Roquette Nouvelle Generation (Roquette NG) shoulder-launched weapon system, which is part of the AT4-CS family, for the French Army in December 2014.

Saab secured an order from an undisclosed customer for AT4 CS ER (extended range) and the AT4 CS HP (high penetration) with deliveries scheduled for 2018.

Saab Bofors has used many design features of Carl Gustav while developing the AT4.  A large amount of ammunition can be fired from AT4 as the weapon is recoilless.

Aiming at the target with the AT4 is accomplished through range-adjustable plastic sights, which can be covered up under the sliding covers. The weapon carries  an optical night sight.

The AT4 warhead can penetrate more than 17.5in of armour plate. The weapon covers a minimum arming distance of 10m, which makes it more accurate in targeting short distance targets. Wooden structures, even if they are heavy timbered, cannot offer any resistance to AT4.

The weapon can create a hole in armoured vehicles. The AT4 warhead is still undergoing many typical tests in urban targets.

AT4 is a one-shot weapon that has different projectiles, including HEAT (high-explosive anti-tank), AST (anti-structure tandem-warheads), ER, HE (high explosive), HP, and RS (reduced sensitivity).

The projectiles are preloaded into the launcher. The high-explosive anti-tank projectile can penetrate up to 420mm of rolled homogenous armour.

“Saab Bofors has used many design features of Carl Gustav while developing the AT4.”

The high-explosive dual purpose can be used against buildings and bunkers, and the projectile can also be used to detonate on impact or with a delayed detonation.

The HEDP 502 projectile can penetrate up to 150mm of RHA. The high-penetration projectile has extra penetration ability, which enables it to pass through 500mm to 600mm of RHA.

The AST warheads are specifically designed for meeting the urban warfare.

The AT8 is a new projectile developed for bursting bunkers and AT12 is another modern 130mm frontal engagement version projectile, which can penetrate front armour of any modern battle tank (MBT).

The disadvantage of AT4 is that it develops a large backblast behind the weapon, which may harm the operator of the weapon and friendly forces within the vicinity. It, therefore, becomes difficult to use the weapon in restricted areas. In order to combat the backblast difficulty a new variant called AT4-CS (confined space) has been introduced to specifically meet urban warfare requirements.

AT4-CS uses saltwater countermass, which absorbs the backblast and slows down the pressure wave. It is 914.4mm long and weighs 7.5kg. It can be used against targets up to 274m. AT4-CS is available with two types of warheads, namely HP and RS.