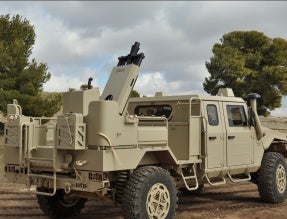 At DSEI, EXPAL presents the new version of the EIMOS 81 system with a series of improvements in different areas such as ergonomics, with a new platform integrated in a URO VAMTAC with four crew cabin seats, sensors integration, new meteorological station for ballistic calculations improvement, and a new version of the indirect fire support information system of EXPAL: TECHFIRE with new functionalities and a simplified and more intuitive interface.

EIMOS keeps the great advantages that it already offered in its previous design and that make it unique in this type of arms systems. Its soft recoil system, with no need of the use of additional stabilisation support, the automatic aiming system or its firepower capabilities of 360º are advantages the market and user have recognised and valued.

Other proposals that you would be able to see in EXPAL’s booth in DSEi are its artillery extended range ammunition family of 105mm to 155mm, the offer in c/IED solutions or its capacity in motor grains for rockets and missiles.

The event, which unites products and technologies of earth, sea and air, will take place the next 15 September in London.