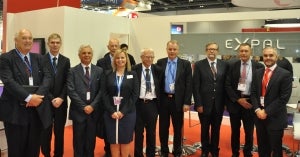 The European Land Defence Industrial Group (ELDIG) of the AeroSpace and Defence European Association (ASD) held its Fast Reaction Team (FRT) meeting at the 2013 DSEI event in London, with attendance from a majority of important European companies in the land sector. The meeting was hosted at EXPAL’s booth at the exhibition. EXPAL is now chairing the ELDIG group until the next Eurosatory Exhibition (Paris, June 2014), following Navantia’s chairmanship last year.

European Defence Agency (EDA) also attended the meeting through its industry and market directorate. At the EDA / ELDIG joint meeting, a follow-up review of the various land initiatives that both organisations are promoting, like the future land systems (FLS) Roadmap, an implementation plan that identified main areas, capabilities and key technologies to develop and sustain within Europe in the coming years.

The ELDIG’s initiative on unmanned ground vehicles (UGVs) was also discussed as an example of a programme that fulfills FLS objectives, providing operative capabilities within EU armies and enabling the EU industry to position itself as a key player in the world market. UGVs are essential for European armies and may be considered as a flagship programme to develop main capabilities and novelty technologies for land systems.