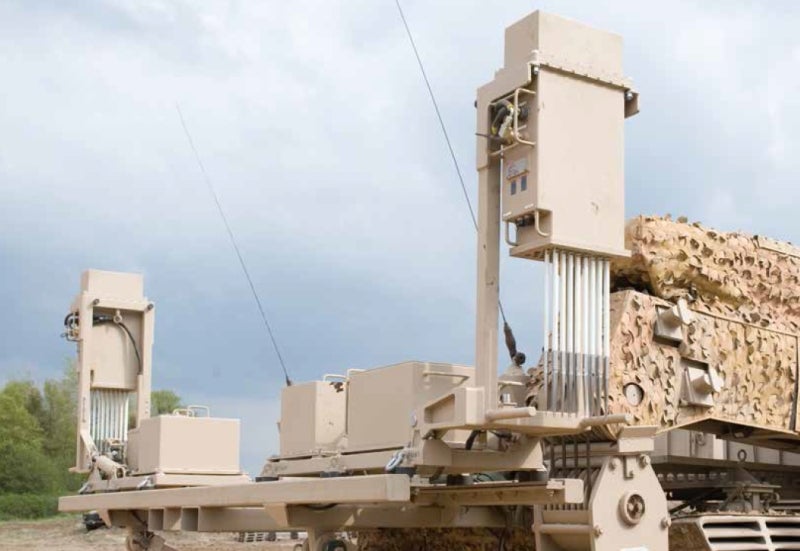 The Obstacle Marking System (OMS) is a combat vehicle mounted electro-pneumatic payload dispensing system most commonly used for marking the boundaries of routes and areas. Designed to fire marker poles into the ground at controlled intervals, the OMS gives a host vehicle the capability to clearly mark out hazardous areas such as the edges of a minefield breached lane.

An OMS comprises dispenser units mounted either side of the vehicle, compressor units mounted on the vehicle, an OMS control unit (OMSCU) and a set of marker poles. The dispenser unit enables marker poles to be fired pneumatically, either manually or automatically, into a variety of surfaces from sand and soil to asphalt and concrete at either timed or distance-based intervals.

The OMS is in active service worldwide, including forces such as the British Army, US Army, US Marine Corps, Swiss, Swedish, Dutch, Finnish, Danish and Canadian Army.

A dispenser unit is placed into its operating position by a deployment mechanism. Deployment is accomplished by a hydraulic cylinder. Only when the dispenser is fully deployed will it fire marker poles.

An OMSCU controls the deployment procedure and various manual and automatic settings ensure that marker poles can be fired on command or at pre-set time or distance intervals. ‘Marker missions’ can be stored in the system menu enabling quick recall of settings for operations such as breach, funnel, handrail, and exit marking. The OMSCU display also gives the operator feedback on the type of payload selected and the quantity of marker poles remaining in each dispenser unit.

The OMS is a simple, compact, light and modular system that can be fitted quickly and easily to most combat vehicles in a variety of configurations.

As well as being able to fire specialised payloads, dispenser units can be ‘daisy chained’ together to form marker sets in multiples of 50 per vehicle side.

No tools are required to reload the system and spare marker poles may be stored on the vehicle in purpose-built containers. The system can be attached to a wide variety of vehicles for a broad range of applications and is specifically designed to complement Pearson Engineering’s special-to-role equipment. The OMS is also known as the lane marking system (LMS).