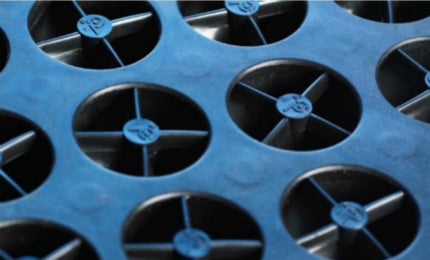 Since the early 1960s, Donaldson Strata™ Tubes technology has been used extensively on ground vehicles, rotorcraft and other critical equipment exposed to harsh environments.

The standard outlet is Donaldson’s original design and is still used in several applications. The firm has recently developed an advanced outlet tube, featuring a ramped-style scavenge discharge. The ramped outlet allows high-density configurations, resulting in a reduced inlet area, while maintaining high-efficiency levels. This is ideal for applications where space is at a premium.

Compared to the standard style, the ramped outlet tube requires half the amount of scavenge flow for equivalent efficiency.

Donaldson also have a zero-scavenge model available for applications without a scavenge airflow source. Its lightweight Strata Tubes have no moving parts to wear out or break and require minimal maintenance.

The company’s strata tubes filter contaminants form ambient air, which is then used to cool electronic components within the radar system. It is essential for proper radar operation that these critical electrical components have sufficient volumes of circulating air in order to remain at the specified operating temperature, while also maintaining a high level of efficiency such that unacceptable levels of dirt and debris do not damage internal circuitry.

Ground vehicles and equipment supplied by Donaldson is as followed: