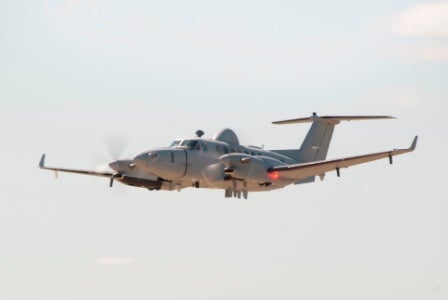 The US Army has started airborne testing of two Boeing-built enhanced medium altitude reconnaissance and surveillance system (EMARSS) aircraft at the Aberdeen Proving Ground in Maryland, US.

Besides a target-tracking evaluation against a range of targets, the aircraft are also scheduled to undergo mission systems calibration and testing for their certification prior to delivery to the army.

Boeing EMARSS programme manager Mark Stephenson said: ”It’s gratifying to see this innovative programme reach the next stage of development, one step closer to delivering to our customer.”

The first aircraft had successfully completed its initial test flight at Beechcraft‘s facility in Wichita, Kansas, US, in May 2013, which paved the way for limited user tests and the Milestone C low-rate initial production (LRIP) decision.

A modified Beechcraft King Air 350 ER aircraft, EMARSS is an airborne intelligence, surveillance and reconnaissance (AISR) system, designed to provide brigade combat teams with the ability to accurately detect and track surface targets day or night, in all weather conditions.

Primarily intended to operate as a single platform in support of tactical missions, the manned, medium-altitude aircraft is also capable of contributing to the joint overall AISR constellation by offering connectivity to tactical and national networks in the battlefield.

Fitted with an electro-optic and infrared (EO/IR) full-motion video sensor (FMV), communications intelligence collection system and aerial precision guidance system, the aircraft is scheduled to be assigned to the US Army Intelligence and Security Command’s (INSCOM) aerial exploitation battalions (AEB).

Four EMARSS aircraft are being developed by Boeing as part of a two-year EMD contract awarded by the army in December 2010, which also includes options for the development of an additional two aircraft and six LRIP units, as well as supply of logistical support services.

Image: the EMARSS aircraft during its initial flight test at Beechcraft’s facility in Kansas, US. Photo: courtesy of Boeing.