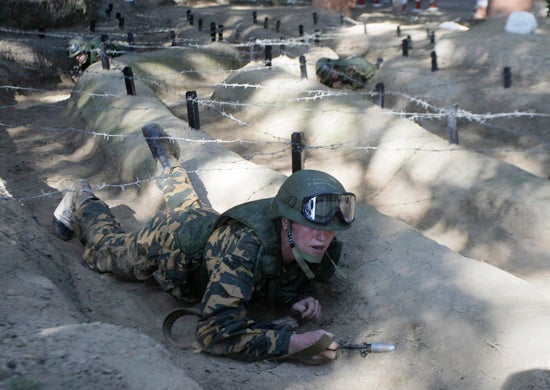 The Russian Ministry of Defence (MoD) is planning to send 250 military personnel to participate in the counter-terrorism combat exercise, code-named Indra, scheduled to be carried out with the Indian Army in October 2013.

The annual drills will witness participation from more than 250 servicemen from Russia’s Eastern Military District and the same number of Indian soldiers, RIA Novosti reported citing a statement from the district’s press service.

Scheduled to be carried out at the Mahajan Field Firing Range (MFFR) in Bikaner, Rajasthan, India, the drill is for training soldiers in joint planning and execution of anti-terrorist missions in a semi-desert environment, the statement added.

The final planning stage for the exercise is scheduled to be conducted in Bikaner in August.

A battalion-level exercise, INDRA is aimed at enhancing defence cooperation and interoperability, as well as strengthening military-to-military relations between the two armies.

"INDRA is aimed at enhancing defence cooperation and interoperability."

India and Russia have so far conducted six of the INDRA series joint ground and naval exercises since 2003, with the last drill being held between the two countries’ army units at a training range in the Siberian republic of Buryatia in August 2012.

Featuring around 50 Russian combat vehicles, and the Indian Air Force’s (IAF) Ilyushin-76 aircraft, the exercise included a number of firing, tactical and driving manoeuvres, as well as providing Indian soldiers with an opportunity to familiarise with the Russian military equipment.

Image: A Russian soldier during INDRA-2010 exercise in India. Photo: © Ministry of Defence of the Russian Federation.