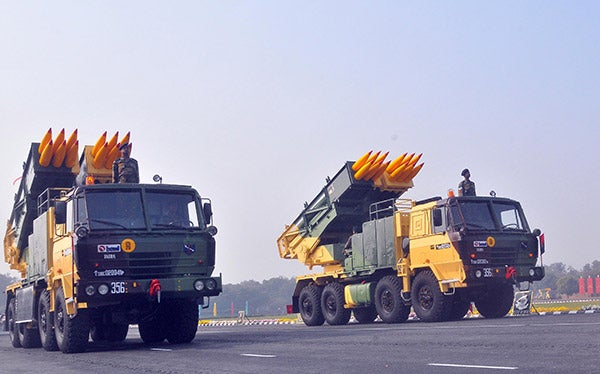 The Indian Defence Research and Development Organisation (DRDO) has conducted development trials of an advanced variant of the domestically manufactured Pinaka rocket system from firing point-II of the Proof and Experimental Establishment (PXE) at Chandipur in Orrisa, India.

Carried out by DRDO’s Pune-based Armament Research and Development Establishment (ARDE) personnel, three rounds of Pinaka rockets were test-fired from a multi-barrel rocket launcher (MBRL) during the testing to evaluate the rockets’ stability in flight, accuracy and consistency.

An unidentified defence official was quoted by The New Indian Express as saying that the Pinaka rocket was capable of acting as a force-multiplier, and all the rounds have yielded desired results.

"The tests were made after some developmental changes in the system," the official said. "We would carry out a few more tests on Friday."

Carried out with logistics support from the PXE, the trials confirmed Pinaka’s ability to fire rockets to a range of 30km, even though the system is capable of launching projectile weapons to a range of 39 to 40km.

"The unguided rocket system put under trial here could be used to destroy a higher geographical area with its salvo of rockets."

The MBRL used for testing has been designed to launch 12 rockets with 1t of high explosives within 40 seconds.

Another defence scientist told the newspaper that the launcher’s quick reaction time and high-rate of fire provides the army with an edge during low-intensity combat situations.

"The unguided rocket system put under trial here could be used to destroy a higher geographical area with its salvo of rockets," the scientist added.

The system features six launcher vehicles of 12 rockets each, as well as two command post vehicles including a fire control computer, Digicora MET radar and six loader/replenishment vehicles with a payload of 100kg.