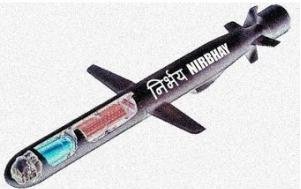 An unidentified DRDO scientist was quoted by Press Trust of India as saying that range co-ordination work and final check-up for the test was almost complete and the test flight would be conducted if everything goes accordingly.

The two-stage surface-to-surface missile is expected to be tested for its full operational range of 1,000km during the development trial, which was originally scheduled to take place in October 2012 but was delayed due to modifications to the missile launcher.

Designed by DRDO’s Aeronautical Development Establishment (ADE), the Nirbhay is a 6m long medium-range, subsonic cruise missile with stealth capabilities, and can cruise at a speed of 0.67 Mach.

"The Nirbhay is a 6m long medium-range, subsonic cruise missile with stealth capabilities, and can cruise at a speed of 0.67 Mach."

Based on the Lakshya pilotless target aircraft (PTA), the remote-controlled missile can accurately identify and attack a particular target in a group, and also features loitering capabilities, control and guidance, as well as the ability to carry 24 different warheads types depending on mission requirements.

The missile is launched from road mobile launcher, which is an all-terrain and all-wheel drive Tata LPTA 5252-12 X12 vehicle, using a booster for acceleration, and powered by the turbo-jet engine during the cruise phase.

Capable of being launched from multiple land, sea and airborne platforms, the missile can hover over or around hills at a very low altitude without being detected, and can also drop bombs if required.

The all-weather missile is expected to in operation with the Indian Army, Navy and Air Force in the next 12 to 18 months.