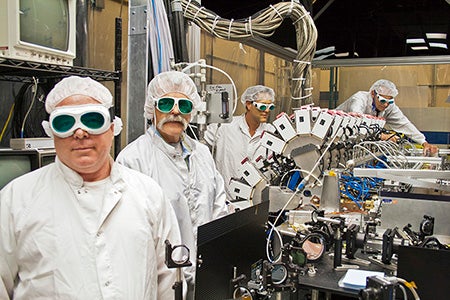 During the demonstration, the system exceeded the required thresholds for power and beam quality, reaching over 30kW, nearly 30% more powerful than RELI requirements.

The combination of the two factors resulted in a measure of brightness which the company claims to be among the best measured to date in the industry.

Boeing directed energy systems vice-president and programme director, Michael Rinn, said a laser should be capable of achieving high brightness while simultaneously remaining efficient at high power in a bid to be truly viable as a weapons-class system.

''Our team has shown that we have the necessary power, beam quality, and efficiency to deliver such a system to the battlefield," Rinn said.

"A laser should be capable of achieving high brightness while simultaneously remaining efficient at high power."

"These demonstrations prove the military utility of laser systems."

Integrated with a series of high-power industrial lasers to generate one concentrated, high-energy beam, TDL is a high-power, solid-state laser system, designed to provide military customers with precision targeting for a range of tactical missions.

The system's commercial, solid-state lasers have already proven to be extremely reliable, requiring low levels of support and maintenance.

Powered by electricity, the solid-state lasers deliver pinpoint accuracy required for accurate destruction of a target with minimum to no collateral damage.