Attack helicopters, or helicopter gunships as they are also known, have become almost instantly identifiable given their prevalent use in combat zones such as Iraq and Afghanistan.

Their ability to engage targets on the ground as well as in the air allow them to cater for multiple roles and, as such, are every military commander’s dream when debating how to resolve varying mission requirements.

Armed with cannons, rockets and guided missiles, whilst also being equipped with leading avionics and aerobatic equipment, the modern attack helicopter needs to be adept at providing anti-tank capabilities and close air support for ground troops. 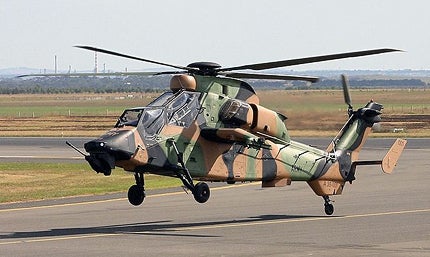 Following a request for a battlefield helicopter issued by both France and Germany in 1984, the Eurocopter was selected in 1989 to produce five prototypes for such a helicopter. Serial production began in 2002, more than decade after the helicopter’s first flight, and delivery of the first Tiger took place in September 2003.

The Tiger itself can withstand 23mm auto-cannon fire and boasts minimal visual, radar, infrared and sound signatures to remain difficult to identify.

The EC665 Tiger helicopter is being developed by Eurocopter, a subsidiary of EADS (European Aeronautics Defence and Space).

The body of the aircraft is composed from 80% carbon fibre reinforced polymer and Kevlar, 11% aluminium and 6% titanium, whereas the Tiger’s rotors are made from fiber-plastic able to withstand bird strikes and combat damage.

The first active deployment of the Tigers came in July 2009, when three French Tigers arrived in Afghanistan tasked with performing armed reconnaissance and fire support missions to quell Taliban insurgency in the country.

After totalling more than 1,000 hours of operation in Afghanistan, French Tiger helicopters were used alongside British Apaches in Operation Unified Protector, enforcing a NATO-led no fly zone over Libya.

Mil’s Mi-28, Russia’s choice of anti-armour attack helicopter, was first flown in 1982 but was not introduced into service until 2006, and deliveries are still underway.

The Mi-28 combat helicopter has been developed by Mil Moscow Helicopter Plant and is known by the NATO codename Havoc.

Equipped with an under-nose barbette which holds a 30x165mm Shipunov 2A42 auto-cannon, as well as external loads carried on pylons beneath stub wings, the attack craft is flown by two pilots, protected within two heavily armoured cockpits. The helicopter’s windshield is able to withstand 7.62mm – 12.7mm calibre bullets, offering enhanced protection.

The Russian Air Force is rumoured to have approximately 44 in operational service, although the Indian Military has requested a modified prototype of the aircraft to be fitted with Belgian and French avionic systems.

The Ka-50 Black Shark helicopter, developed by Kamov Helicopters JSC, carries the Nato codename Hokum A, with Hokum B the two-seat version, Ka-52.

The Ka-50’s recognisable feature is its distinctive Kamov coaxial rotor system, which removes the need for a tail rotor and improves the aerobic qualities of the helicopter, increasing its maximum speed.

Primarily armed with the same Shipunov 2A42 cannon equipped on the Mi-28, the KA-50’s underwing hard points can carry an assortment of attachments, including UPK-23-250 gun pods, two APU-6 missile racks or Vympel R-73 air-to-air missiles, allowing the operator an array of weapon options to suit specific mission requirements.

The Ka-50s were first used in Russian operations against Chechen rebels, tasked with eliminating weapons caches and fortified camps belonging to Chechen insurgents. Often situated in mountainous and difficult terrains, the Ka-50’s successful performance confirmed its power and mobility.

Introduced in 1986, 11 years after it was first flown, Boeing’s AH-64 Apache is arguably the most well known attack helicopter in existence. Still in active service, some 1,174 Apaches had been produced by February 2010 and are now used by the armed forces of 12 nations.

The Apache is a twin-engined army attack helicopter developed by McDonnell Douglas (now Boeing). It entered service with the US Army in 1984.

The Apache has become the attack helicopter of choice for the US military and has been religiously used since its first combat designation, the 1989 invasion of Panama under Operation Just Cause. This was followed by Operation Desert Storm in 1991, wherein Apaches were used to destroy a portion of the Iraqi radar network.

During the course of the Gulf War, 277 AH-64s took part, destroying more than 500 Iraqi tanks and suffering just one loss.

According to figures compiled by Boeing, the US Army’s fleet of Apache helicopters has accumulated more than 3 million flight hours since the first flight of a prototype in 1975.

The Apache’s popularity owes a considerable amount to its deep-attack capabilities, being able to operate hundreds of kilometres past a front line and being able to remain operational in spite of heavy damage.

The US Marine Corps‘ AH-1Z Viper or Super Cobra.

Based upon Bell’s successful AH-1 Cobra attack helicopter, the AH-1Z Viper or Super Cobra has been developed for the US Marine Corps under the H-1 upgrade programme.

After completing its first flight in 2000, the Viper commenced sea trial flight testing in May 2005 and underwent five years of extensive operational evaluations before finally being declared combat-ready in September 2010.

One of the key benefits the Viper possesses over rival helicopters lies within its hingeless rotor system. It contains 75% fewer parts in comparison to other four-bladed articulated systems, resulting in cheaper, easier and more efficient maintenance.

The US Marine Corps received its entire order of 28 aircraft in January 2011, remaining the sole operator of the helicopter.

The Agusta A129 Mangusta attack helicopter.

The Italian Army originally admitted the need for an attack helicopter in 1972, with Agusta beginning the design work of what was then designated as the A129 in 1978.

Following its maiden flight in 1983, a fifth prototype flew in 1986 and impressed the Italian armed forces to such an extent that they ordered 60.

Italy remains the sole operator, with the UK and Netherlands opting to operate the Apache and Spain choosing Eurocopter’s Tiger, with three AW129s deployed to Iraq before the Italian withdrawal.

Currently in development, Hindustan Aeronautics Limited’s multirole Light Combat Helicopter (LCH) is progressing towards its planned induction with both the Indian Air Force and Indian Army.

The helicopter has been derived from the HAL Dhruv as part of a cost cutting exercise and first flew in March 2010. Most recently, a second, weaponised prototype, equipped with subsystems, successfully achieved its first flight in July 2011. Two more prototypes are currently under construction, with plans to induct the helicopter in 2012.

By incorporating stealth features, night operation capabilities and various state-of-the-art avionics equipment, the LCH is expected to play a major role in meeting the defence requirements of the Indian armed forces, with orders for 65 and 114 aircraft lodged by the air force and army respectively.