Height to Top of Rotor Head

Hover Ceiling out of Ground Effect

The Dhruv advanced light helicopter (ALH), multirole and multimission helicopter is in service with the Indian Army. 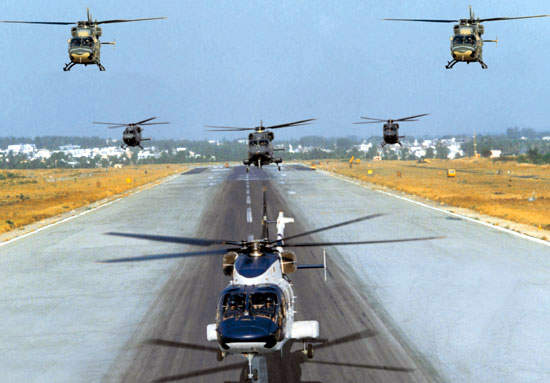 Eight Dhruv advanced light helicopters have been delivered to the Indian Army, three to the navy, four to the air force and three to the coast guard.

A more powerful engine for the Dhruv, the Shakti (Ardiden 1H) rated at 900kW is being developed between HAL and Turbomeca and will be manufactured at Bangalore. 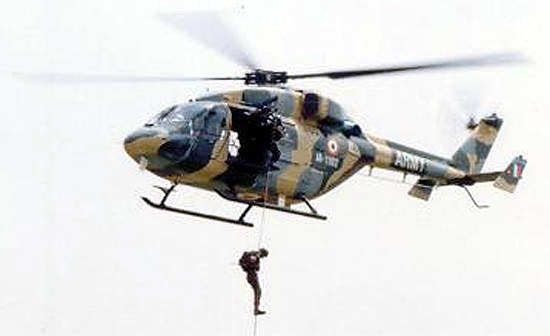 The Dhruv has a cruise speed of 265km/h, range of 700km and endurance of four hours and 20 minutes.

The Helicopter Division of the government-owned Hindustan Aeronautics Limited (HAL) has developed the Dhruv (Pole Star) advanced light helicopter (ALH), a light (5.5t class) multirole and multimission helicopter for army, airforce, navy, coastguard and civil operations, for both utility and attack roles by day and night.

The helicopter, which is built to FAR 29 specifications, entered series production in 2000.

Orders and deliveries of the Indian helicopter

In all 18 Dhruv helicopters were delivered to Indian Defence Forces in 2000-2003 – eight to the army, three to the navy, four to the airforce and three to the coast guard.

The army received its first three Dhruvs in March 2002. By June 2008, 76 helicopters had been delivered to the army and airforce with 159 more on order. The Indian Navy has decided not to place any further orders.

In June 2008, HAL received the first export order for the Dhruv with seven helicopters for the Air Force of Ecuador.

In August 2006, Indian Air Force and Coast Guard Dhruv helicopters were instrumental in rescue operations after devastating floods in India. Over 500 people were rescued.

In February 2007, the Dhruv was qualified for high-altitude / low-temperature operations in Kashmir and Jammu.

In August 2007, maiden flights took place of the Dhruv powered by the new Shakti engine and of the weaponised variant of the helicopter.

In September 2007, the Indian Army announced that the Dhruv was ready for deployment to the Siachen sector in the Himalayas. The helicopter was deployed to the high-altitude airbase at Manasbal (Srinagar) and, in October 2007, a Dhruv helicopter flew at a record altitude of 27,500ft in Siachen.

Hindustan Aeronautics Limited and Israel Aircraft Industries have an agreement to market the Dhruv helicopter worldwide. IAI has developed an integrated helicopter avionics suite for the Dhruv, which includes day-and-night observation, electronic warfare suite, observation and targeting, and a flexible weapons carrying system.

Design of the Dhruv ALH

The helicopter is of conventional design and about two-thirds by weight of composite construction. The high tail boom allows easy access to the rear clamshell loading doors.

The four-bladed hingeless main rotor can be manually folded.

The blades are mounted between cruciform-shaped carbon-fibre-reinforced plastic plates on a fibre elastomer constructed rotor head.

The helicopter is equipped with an active vibration control system developed by Lord Corporation of North Carolina that uses sensors to monitor on-board conditions and outputs signals to actuators to cancel fuselage floor vibrations.

The cockpit section of the fuselage is of Kevlar and carbon-fibre construction and is fitted with crashworthy seats.

Weapons and armaments on the Dhruv

“The Dhruv’s countermeasures suite can include: radar and missile detectors, infrared jammer, chaff and flare dispensers.”

The army and airforce helicopters have stub wings fitted to carry up to eight anti-armour missiles, four air-to-air missiles or four rocket pods for 70mm and 68mm rockets.

In December 2006, Nexter Systems (formerly Giat) was awarded a contract for the installation of the THL 20 20mm gun turret on the first 20 Indian forces Dhruv helicopters. The turret is armed with the M621 low-recoil cannon and is combined with a helmet-mounted sight.

Weapon system integrated (WSI) versions for the Indian Army will be fitted with the Nag anti-tank missile, being developed by India’s Defence Research and Development Organisation (DRDO). The Nag missile has imaging infrared guidance and a range of about 4km. The WSI variant will also have FLIR (forward-looking infrared), CCD (charge coupled device) camera and a target acquisition system with thermal sight and laser rangefinder.

The Dhruv’s countermeasures suite can include: radar and missile detectors, infrared jammer, chaff and flare dispensers.

The cargo compartment at the rear of the cabin has a volume of 2.16m³.A crew door and a rearward sliding door are installed on each side of the fuselage for the military helicopters.

Clamshell doors at the rear of the cabin provide easy and fast access for loading and unloading cargo.

Engines on the Indian multirole ALH

The helicopter has a twin-engine configuration allowing continued flight virtually throughout the flight envelope. The prototype helicopter is fitted with two Turbomeca TM 333-2C or 2B2 engines rated at 740kW take-off power.

A more powerful engine for the Dhruv, the Shakti (which carries the French name Ardiden 1H) rated at 900kW was developed under a cooperative agreement between HAL and Turbomeca and will be manufactured at Bangalore. Avio was selected to supply integrated dynamic systems (IDS) for the Shakti engine.

The first flight with the new engine took place in August 2007 and it was certified in 2008.

The helicopter is fitted with self-sealing crash-resistant tanks installed under the cabin floor. The fuel system includes cross feeding and fuel dumping systems. The maximum fuel capacity is 1,400l.

The airforce and army helicopters are equipped with non-retractable metal skid landing gear. All variants of the helicopter are fitted with a tail skid to protect the tail rotor in tail-down landings.

FPT Industries, Portsmouth, UK, supplies the Kevlar flotation bags for the skid and wheeled variants of the helicopter. The helicopter can also be equipped with a liferaft.