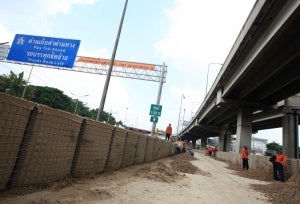 As part of the partnership, HESCO is the lead sponsor of the Asian Natural Disaster Conference, starting 9 February, where international disaster prevention experts will address delegates from across Asia.

It was the HESCO rapidly-deployable Concertainer flood prevention barrier system which helped bring relief from the devastating floods which hit Thailand last November.

The barriers, using the same technology for which HESCO provides life-saving fortification for troops in war zones, played a vital role in protecting Thailand’s infrastructure during what Prime Minister Yingluck Shinawatra called "the most critical natural disaster in Thai history".

HESCO has a proud record in flood prevention, with its barriers helping to save lives and properties around the world, including being deployed during the devastating floods in the USA which followed Hurricanes Katrina and Gustav and more recently, protecting critical infrastructure and crops along the Mississippi River.

HESCO sales manager, Shaun Ellis, said: "As the United Nations has identified, Asia is more prone to natural disasters than any other region in the world, but lacks preparedness. That is now being addressed."

He continued: "To give an example, Don Muang Airport suffered THB2bn (US$64m) in damage costs and many more billion in lost revenue and inventory. HESCO barriers could protect the entire facility for THB125m (US$4m).

"As the lead advisory group, ANDPI is taking a lead role in this and we are proud to be one of their partners, not just in Thailand but throughout South East Asia. We are now in talks to provide further barriers around the region which shows that contingency planning is being taken extremely seriously.

"It has been recognised that our barriers proved extremely effective in protecting Bangkok’s infrastructure last November and as a result we are engaged with agencies through South East Asia to meet their requirements."

Image caption: HESCO barriers being installed alongside the Din Dang Highway in Bangkok during the November 2011 floods.