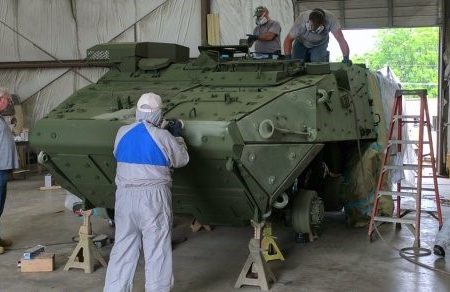 You’ve probably seen plenty of Army vehicles on the road. They might be standard olive drab, or possibly a desert camouflage pattern. However they’re painted, the basic material for the coating is called CARC, Chemical Agent Resistant Coating.

“Our Nato customers, our allies, they are all using this. This paint is in theater,” said Pam Clark from Huntsville’s CFI Military Solutions. She is not talking about CARC.

Pam is talking about “Intermat Stealth, Anti-Thermal Spraying Coating”. It’s a paint CFI was showing off in its booth at the recent Space and Missile Defense Symposium.

“We have a paint that covers their IR signature,” said Pam. IR stands for infra-red. You can think of it as the heat signature. Obviously, if a vehicle has a less detectable heat signature it would be less visible to a sensor that homes in on heat. The kind of sensors that might be on an enemy drone, or a heat-seeking missile.

“We have data that backs it up now on the Stryker (vehicle) that we had down here. It will keep the inside cooler too,” said Pam Gardner.

She believes the testing will prove the worth of the paint for the U.S. Military, and as Pam has already said, it’s being used by NATO allies. Something that lessens the heat signature would save lives. If it keeps a vehicle cooler it would protect sensitive instruments, which could also be a lifesaver.

CFI Military Solutions believes it has a winner.