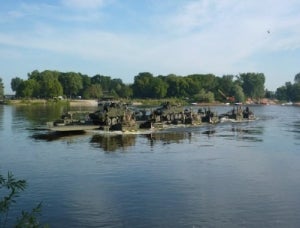 It was built as part of the Anakonda 2016 exercise, a Polish Operational Command-led multinational training event with the support of the US Army Europe (USAREUR). The exercise is designed to strengthen military cooperation, cohesion and interoperability among NATO and partner nations.

During Anakonda 2016, the 350-metre floating bridge was built by eight British and 22 German M3s in only 35 minutes. After the assembly was complete, vehicles from participating NATO land forces crossed over the bridge. The German and British engineer units, co-located in Minden, Germany, are the only NATO units operating M3, an Amphibious Bridge / Ferry System.

As reported by Defence News, Lt. Gen. Ben Hodges, the US Army Europe commander, who rode in a Stryker vehicle crossing the finished bridge, said, "This is the best bridge I’ve ever seen in my life. You’ve got a wonderful example of interoperability. This is a great example of an ally providing the capability that everybody else needs."

GDELS’ M3 bridge is a unique capability in the German and British Armies and also in NATO. During many international exercises in the past months, the German M3 unit was called to support other nations with the bridge.