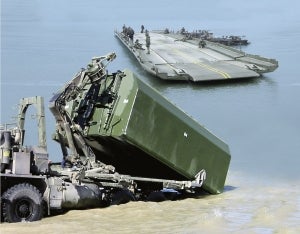 General Dynamics European Land Systems (GDELS) has signed a USD$28 million contract from the Australian Department of Defence (DOD) for the production and delivery of the Improved Ribbon Bridge (IRB) under the Land 155 programme for enhanced gap crossing equipment.

The contract covers the delivery of bridge bays and logistics packages, as well as operator and maintainer training. The IRB will replace the legacy Floating Support Bridge, which was delivered by GDELS-Germany’s predecessor company EWK in the 1980s.

The IRB can be operated as a multi-bay ferry in addition to a floating bridge, and provides wide wet-gap crossing capability for loads up to MLC80 Tracked / 96 Wheeled, including the Australian Army’s M1A1 Main Battle Tank.

The IRB bridge bays will be transported on and launched from a new multi-purpose truck, which will be purchased under the Land 121 programme. Delivery of the first systems will start in the fourth quarter of 2016.